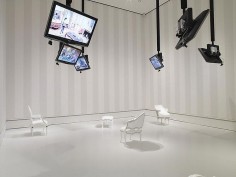 Please Be Seated is a video installation by contemporary artist Nicole Cohen that allows you to interact with the Getty Museum’s 18th-century French chairs.

The installation blends footage from decorative arts galleries in the Getty Museum and three French museums with live video captured by a surveillance camera. As you sit in reproductions of the original chairs, you become part of the installation, virtually entering historic recreations of 18th-century French spaces. With this installation Cohen compresses time and space to create a metaphorical game of musical chairs.

Cohen’s installation invites you to sit in reproductions of 18th-century chairs and see yourself transported into the chairs’ historic settings on the video monitors.

The Getty Museum commissioned this installation to bring new perspectives to its collection of French decorative arts. Galleries designed to display historical architecture, decorative arts, and furniture evoke the original interiors and lifestyles of a particular era. Within these museum installations, visitors are invited to travel through space and time to imagine the daily rituals, social interactions, and personal narratives that might have taken place in such domestic settings.

Through her installation at the Getty, Nicole Cohen pushes the boundaries of this experience into the realm of active participation and fantasy. The intersection of contemporary popular culture with historical and social environments has been a theme in Nicole Cohen’s work, which often juxtaposes real and ideal people and settings to provocative and dreamlike effect.

Cohen works in one of the Getty Museum’s galleries. Video footage shot at the Getty and in France become the backdrop for visitors’ interaction with her installation.

Cohen selected six 18th-century French chairs from the Getty Museum’s collection as the subject of her installation. Then, editing together footage shot on location in France and at the Getty Center, she created six 10-minute videos. Cohen placed the Getty’s chairs into the video of these settings using digital technology. In some cases she virtually transported the chairs back into their original settings in France. For example, Cohen digitally placed one of Marie Antoinette’s chairs in the Getty collection into its original context in a room at Versailles.

Cohen collaborated with local furniture maker, Mike Fair, to create white versions of the Getty’s chairs that mimic the shape and function of the originals. In the installation, video monitors above each chair display the footage shot in France and at the Getty. The videos are activated and completed when the visitor takes a seat in the chairs, stepping into both the installation and the footage itself.

The rooms of museums, historic houses, and palaces themselves represent fantasies of sorts, either through the whimsy of the original owner or reinterpretation by a curator. In Please Be Seated, Cohen adds a level of manipulation and artistic vision by filming, fragmenting, and recombining these interiors. The viewer, seated in Cohen’s abstraction of an 18th-century chair and projected into footage of historical and museum settings, interjects personal, individual responses to complete the work of art.
.
.
.
.
.
.
.
source: nicolecohenorg

NICOLE COHEN is a video installation artist, who pushes the boundaries of perception and questions how we have lived in designed spaces and the differences between the past and the present. She works by combining photography, video, and surveillance. Her work explores constructed spaces and immersive environments to locate the viewers inside of the image to “re-activate” a space from the past. She is interested in themes of psychology, memory, erasure, and identity. To do this she collects vintage magazines, period rooms images, and finds historical locations, to create interactive video projection works and animated videos with photography.

“Her work is positioned at the crossroads of contemporary reality, personal fantasy, and culturally constructed space. Although, trained in painting and drawing, Cohen most frequently uses video as her medium, playing upon intrinsic capacities to manipulate time, distort scale and environment, and overlay imagery. Consistently interested in engaging her audience and challenging the notions of lifestyle, domesticity, celebrity, and social behavior, Cohen also uses the surveillance camera to involve viewers in their own voyeurism.”, by Peggy Fogelman, The J. Paul Getty Museum, “Please Be Seated”, Solo Commissioned Video Installation, 2007-09, from brochure

NICOLE COHEN received her BA from Hampshire College and her MFA from the University of Southern California in Los Angeles. She has exhibited at the Brooklyn Museum of Art, Los Angeles County of Art, Williams College Museum of Art, Shoshana Wayne Gallery, La B.A.N.K Galerie in Paris, France , at the J. Paul Getty Museum in Los Angeles, the Autostadt, Wolfsburg, Schloss Britz in Berlin, Germany, American University Museum at Katzen Art Center in Washington D.C., and in Asia. She has lived in Los Angeles and in Berlin, Germany, and in New York City, where she currently lives and works.
.
.
.
.
.
.
.
source: nicolecohenbigcartel

Nicole Cohen is a an abstract artist, design enthusisast and blogger living in NYC. Through her blog, Sketch42, her home, aesthetic and paintings have quickly caught the eye of collectors and designers alike. Her work and home have been featured in various publications, including popular blogs like Front & Main, Design Sponge, Elle Decor, Time Out NY, Adore, HGTV, and Rue Magazine.