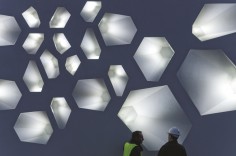 The winning competition entry for the “Espacio de Creación Artística Contemporánea” by Nieto Sobejano Arquitectos proposed the integration of a low-resolution light and media façade on the building surface facing the Río Guadalquivir.
Subsequently realities:united was commissioned to further develop the conception and the design for this media skin in close cooperation with the architects. The starting point for C4 was an analysis of the significant inner structure of the building, which is made up of a tessellated (self-repeating) pattern of polygonal rooms. The inner motif is translated to form a characteristic outer topography on the façade. The surface is made of fiberglass-reinforced cement (GRC) and shows a system of irregular shaped indentations of varying density and size. Those “bowls”, which are geometrically derived from the building’s floor plan, are individually lit to become “pixels” of a large display system.
To transform the façade into a light and media display without fundamentally changing its solid appearance as envisioned by Nieto Sobejano turned out to be the biggest challenge in the project. The façade is accordingly designed to deliver a tactile and solid appearance in the daytime while it turns at night into a unique and dynamic communication wall that reacts very specifically to the architecture. The 100-meter façade consists of 1,319 hexagonal, recessed and pre-fabricated “bowls” on different scales. Each of the bowls serves as a reflector for an integrated artificial light source. The intensity of each lamp can be controlled individually, forming a huge irregular low-resolution grey scale display. The thorough immersion of the “pixel-bowls” – like negative impressions – in the volume of the façade turns the architectural scheme itself into a digital information carrier. During the day, the façade shows a three-dimensional landscape with no sign of being a media facade. Additionally, this tectonically modulated surface topography is characterized by a playful composition of light and shadow that constantly changes with the movement of the sun.
Three different scales of bowls are employed and distributed in huge patterns over the total façade, thereby subtly echoing the building’s architectural elements. Additionally, each bowl appears to be unique in shape and size; and their distribution appears to be irregular. Only the distribution density stays consistent. Analogously to the eye’s retina, this composition allows the definition of areas of varying density or “sensitivity” on the façade. This analogy offers a certain artistic freedom: the resolution of the displayed images can stay low, fitting the blown-up scale of the screen, creating a mode of display in which the motifs are hinted at, rather than unambiguously presented.
The interest in the aspect of “visual acuity” stems from earlier projects and extensive research on the process of visual perception. For visualizations with very low resolution, the precognition of the brain determines whether an image or animation can be recognized. A motif that has been displayed at a higher resolution can be shifted to much lower resolution and still preserve its readability.

In connection with this media art center’s field of work, possibilities of application arise that are interesting for the installation C4. Ultimately, here too, a suitable language must be developed to mediate between the art institution and the city it faces.
Software
Part of the project is also a specialized operating software, which we specifically developed for the demands of unique façade display. The main function of this software is to route and to convert any kind of digital image into the special resolution and pixel arrangement of the façade. As it operates in real time this software is an indispensable simulation & preview tool for the creation process or for the selection of artistic content itself. This is, because of its special resolution and arrangement it becomes very difficult to imagine how certain content works on the façade.
.
.
.
.
.
.
.
source: vimeo

The studio realities:united develops and supports architectural solutions, which incorporate new media and information technologies. realities:united delivers consulting, planning, research and communication. One major focus is the outward communicative capacity of architecture. Another one is the quality of the user experience inside spaces, which are – both in function and appearance- essentially augmented and changed by additional layers carrying information, media content and communication.
Many of the innovative projects of the office are earmarked by strategic initiative and a high proportion of processes dealing with communication and mediation. This approach builds the bridge between utopian ideas, abstract conceptions and final results.
External Links