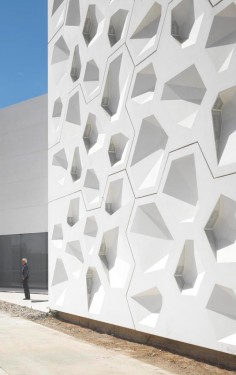 source:nietosobejanocom
Architecture is always feeding on images concealed in our memory, ideas that at some point become clear and unexpectedly mark the outset of a project. Perhaps for this reason the echoes of the Hispano-Muslim culture still present in Córdoba have unconsciously meant more than a marginal note in our project. In contrast to the homogeneity that globalized civilization seems to impose in all contexts, the Contemporary Art Center aims to interpret a different Western character, overcoming the clichés of that common expression.
Just like those literary structures that include one story within another—a never-ending story—we took a system as starting point for the project, a law generated by a “self-similar” geometric pattern, originated in a hexagonal form, which contains at once three different types of halls, of one hundred fifty, ninety, and sixty square meters. Like a combinatorial game, the permutations of these three precincts generate sequences of different halls that can eventually configure a single exhibition space. The artists’ workshops on the ground floor and the labs in the upper level are contiguous to the exhibition halls, to the point that there is no strict differentiation between them: at the workshops it will be possible to hold exhibitions while using the halls for artistic production spaces. The auditorium—the “black box”—is conceived as a scenic space for theater performances, conferences, and films, or as a unique space for audiovisual exhibitions.

The Contemporary Art Center in Córdoba is not a centralized building: the center moves from one space to another, it is everywhere. It is configured as a sequence of precincts linked to a public space, onto which all the different functions of the building flow. Conceived as a place for interaction, it is a common space in which one can express and exchange ideas, see an installation, access exhibitions, visit the cafeteria, spend time in the media library, wait for a performance to begin in the black box, or maybe simply look out onto the Guadalquivir River.
The materials help to achieve the art factory character pervading the entire project. In the interior, bare walls, slabs of concrete, and continuous paved flooring establish a spatial structure susceptible to being transformed individually through different interventions. A network of electric, digital, audiovisual, and lighting infrastructures ease access to sockets and connections throughout the building. On the exterior, the building asserts its presence by means of a single material: prefabricated concrete fiberglass panels, or GRC. These clad opaque and perforated façades, along with the flat roofs and the sloping ones of the halls. The industrialized conception of the system, as well as the waterproofing and insulation properties and the lightness of the material, help to guarantee the precision and rationality of its execution, being part of the combinatorial concept governing the whole project. The façade toward the river, a true mask that activates the exterior façade of the building, is conceived as a screen perforated by several polygonal openings with LED-type monochromatic maps behind them. Images and text, generated by computer-aided video signals, will be reflected on the river’s surface and enable installations specifically conceived for the place.
.
.
.
.
.
.
.
source: metalocuses
The architectural firm Nieto and Sobejano has won the competition to build the new Hotel Königshof in Munich. In the last phase of this competition, the Spanish architects were competing with the other two finalists German firms, firms Sauerbruch Hutton and Wandel Hoefer Lorchl. The owners, a group of hotels in Munich, proposed a central edifio especially relevant as it is located opposite the Karlstor, an important gateway for icudad that was part of the medieval fortifications and protection of access to the city situation.
The developers sought a new architecture that dialogase with its urban environment , replacing an old building located on the central Karlsplatz of the Bavarian capital , purchased in 1938 by the Geisel Geisel Privathotels family.

The first competition phase, held in October 2013, three teams, Nieto Sobejano Arquitectos, Sauerbruch Hutton and Wandel Hoefer Lorch were selected as winners alike. The final decision for Sobejano Nieto was made , according to the promoters , for having a special design façade where incision shows a spectacular break, as most important iconographic element, a façade with a skin of glass and stone that clearly defines architecture that was expected for a luxury hotel with five stars.

In 2017 the existing building , the Königshofs , will be demolished to raise the new nine-storey building , the five-star hotel Privathotels Geisel, will be developed by Spanish architects, Fuensanta Nieto and Enrique Sobejano, ( with offices in Madrid and Berlin ). The hotel will have two additional floors and a restaurant will offer a spectacular panoramic view, which seems to attempt to reconcile the criticisms raised by local newspapers about his doubts about the need for the new building.
.
.
.
.
.
.
.
source: nietosobejano
Enrique Sobejano has worked as an architect since graduating from the Universidad Politécnica de Madrid and the Graduate School of Architecture and Planning at Columbia University in New York in 1983. He is professor at the Universität der Künste Berlin (UdK), where he holds the chair of Principles of Design. He has been a visiting critic and lecturer at various international universities worldwide. From 1986 to 1991 he was co-director of the architectural journal ARQUITECTURA, published by the Colegio Oficial de Arquitectos de Madrid. He chairs and participates in international conferences and juries and is a founding partner of Nieto Sobejano Arquitectos.

Fuensanta Nieto has worked as an architect since graduating from the Universidad Politécnica de Madrid and the Graduate School of Architecture and Planning at Columbia University in New York in 1983. She is a founding partner of Nieto Sobejano Arquitectos and a professor at the Universidad Europea de Madrid. Fuensanta Nieto lectures on architecture and participates in juries and symposia at various institutions around the world. From 1986 to 1991 she was co-director of the architectural journal ARQUITECTURA, published by the Colegio Oficial de Arquitectos de Madrid.

Nieto Sobejano Arquitectos was founded in 1985 by Fuensanta Nieto and Enrique Sobejano and has offices in Madrid and Berlin. Along with being widely published in international magazines and books, the firm’s work has been exhibited at the Biennale di Venezia in 2000, 2002, 2006, and 2012, at the Museum of Modern Art (MoMA), New York, in 2006, at the Kunsthaus in Graz in 2008 and at the MAST Foundation in Bologna in 2014. They are the recipients of the 2007 NATIONAL PRIZE FOR CONSERVATION AND RESTORATION OF CULTURAL HERITAGE AND THE 2010 NIKE PRIZE ISSUED BY THE BUND DEUTSCHER ARCHITEKTEN (BDA), AS WELL AS THE AGA KHAN AWARD FOR ARCHITECTURE (2010), THE PIRANESI PRIX DE ROME (2011), THE EUROPEAN MUSEUM OF THE YEAR AWARD (2012), THE HANNES MEYER PRIZE (2012), AIA HONORARY FELLOWSHIP (2015) AND THE ALVAR AALTO MEDAL IN 2015. Their major works include the Madinat al-Zahra Museum, the Moritzburg Museum, the San Telmo Museum, the Zaragoza Congress Centre, the Joanneum extension in Graz, and the Contemporary Art Centre in Córdoba. Nieto Sobejano Arquitectos currently have projects in Germany, Spain, Austria, Estonia, Morocco, China and United Kingdom. Two monographs have been recently published about their work: “Nieto Sobejano. Memory and Invention” (Hatje Cantz Verlag, Ostfildern, Germany, 2013) and “Fuensanta Nieto, Enrique Sobejano. Architetture” (Mondadori Electa Spa, Milano, Italy, 2014).
.
.
.
.
.
.
.
source: designboom
the new ‘contemporary art center in cordoba’ by spanish practice nieto sobejano arquitectos was started back in 2005 as the winner of a competition and can now be enjoyed by the general public. located in a significant spot along the guadalquivir river, the design recalls the mathematical and philosophical qualities of the former arabic settlement within a contemporary spanish city. the single homogenous volume used so commonly in the current day is re-evaluated through the a scalable concept similar to that of voronoi’s diagram. the polygonal structures are present throughout the dynamic spaces and are represented along the roof plane and facade of the structure in a multitude of scales, playing on the infinite scalability of the mathematical principle. the interior then contains no defined center, it is a combination of unique galleries that read as a single program masterfully rendered in exposed concrete that lends to a certain monumentality and rationalization. the center becomes a crucible for the exchange and analysis of ideas between the most skilled to the most amateur, from the most scientific to the most artistic.

the black box is a multi-functional room designed for theatrical productions, conferences, film screenings or exhibitions. artist’s workshops on the ground floor and laboratories on the second level – the program of creation – is located next to that of exhibition with such little difference that one blends into the other and promotes the fusion of functions. the same laws that govern the porous exterior envelope are then applied to three-dimensional space. the ‘communicative lighting facade’ designed in collaboration with realities:united employs a series of LED emitters and the varying size of voids to illuminate different patterns to the exterior, from pure geometric forms to more complex illustrations. they also allow controlled amounts of natural light to enter the structure projected on internal glass partitions, reflecting the nature of space through light.