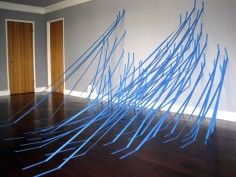 Olga Lah is an installation artist living and working in Los Angeles, CA. She received a B.A in studio art and a B.A. in art history from University of California, Riverside in 2002. She also holds an M.A. in Theology from Fuller Seminary (2006). Lah is an accomplished artist who has earned numerous awards such as First Place in the Art of Now International Competition and finalist for the Kalos Art Prize. She was also selected as a finalist at the 7th International Arte Laguna Prize, held at the Venice Arsenale earlier this year.

A constant motif running through Lah’s work is the unusual or extraordinary use of “ordinary” materials like can lids, sponges and Pentel pen clips. The fact that Lah uses ordinary materials is not, in itself, shocking. If anything, Lah’s work might be thought of as part of a tradition that expands the list of acceptable materials for the artist into the quotidian and banal. What is interesting is the way she uses these everyday materials. There is no hint in Lah’s work of a cynicism that brings the lofty art object down to the world of everyday things. Her work is worlds apart from Marcel Duchamp’s Fountain. Instead, Lah lifts up the ordinary into the extra-ordinary, and she asks us to see things we take for granted as mysteriously and freshly anew.

In 2011, she produced Array (below) in a storage POD. Having recently moved many of my belongings using a POD, I was first struck by how tragically hilarious it would be to open a POD and discover a seething wall of sponges. Like Propogate, the sponges in Array have a life-like quality that can envelop us. There is also a playfulness in Lah’s choice to install Array in a storage POD. Sponges are, themselves, wonderful storage devices. Array causes me to reflect on the way that the massive storage industry in the United States is like a giant sponge trying to soak up all of the goods that we so rapaciously acquire.
.
.
.
.
.
.
.
source: laaaorg

I am interested in the accumulation, repetition and presentation of humble materials to question perception and the nature of reality. I am after a kind of precarious monumentality, built from repetitious labor and craft. I want to point to transcendence in my work and remind the viewer of her or his physicality. I feel sculpture and installation work engages in this kind of sensory experience in a unique way.
.
.
.
.
.
.
.
source: chianticom