how to wear heels 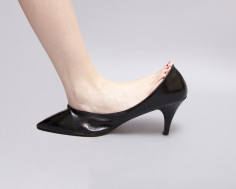 source:olivialochercom
Olivia Locher was born in 1990 in Johnstown, Pennsylvania. She has resided in Manhattan, NYC since 2009. Locher is known for her sarcastic approach to studio photography with a heavy focus on color and concept. Her photographs are grounded in dreamlands and consciousness, while Olivia herself is generally dreaming. She breathes carefully and dances very rarely. Her first book, I Fought the Law published by Chronicle Books is avaliable now.
.
.
.
.
.
.
.
source:adhocis
Olivia Locher is a photographer currently based in New York. Originally from Pennsylvania, her practices took her to the School of Visual Arts where she received her BFA in 2013. Her works use imagery to depict thoughtful narratives on social and cultural practices. Locher curates scenes using props, models, and digital manipulation that are inspired by her interest in art and fashion to create depictions of ideas that are charged with humor and irony.

Locher’s most recent and popular series titled “I Fought the Law” portrays laws from each of the 50 states, humorously trivial in their nature, and ironically portrays them in the acts of breaking those laws. Other projects like “How To” borrow ideas from menial human tasks and challenges them to be thought of in unique ways. Locher is also an active photographer for many fields of fashion including clothing lines, magazines, and New York Fashion Week. See more of her work by following her instagram.
.
.
.
.
.
.
.
source:neonpajamascom
Last fall, Manhattan-based photographer Olivia Locher released the book I Fought the Law. Featuring a visually stunning compendium of bizarre and outdated laws from all 50 states (as well as a handful of renditions shrouded in myth), Locher was able to hone in on her eye for creativity and wit into one mesmerizing book. Like how in Nevada it’s illegal to put an American flag on a bar of soap. Like how in Ohio it’s illegal to disrobe in front of a portrait of a man. While the book is still a new(er) release, Locher has continued to assemble hypnotizing photo shoots and release a plethora of finalized portraits. Images that feature women ironing their hair, models freshening their breath with flower petals, men chewing on typewriters, and much, much more. Combining elements of magical realism with saturated backdrops and plenty of playfulness, Olivia Locher has managed to build a world where the strange seems normal, where anything can happen (and when it does, it usually involves a mess). With a home studio at Locher’s disposal and with “no off switch,” the prolific artist answered a handful of questions and spoke about daily rituals, the pleasure of her own company, upcoming projects, and being allergic to bees.
.
.
.
.
.
.
.
source:featureshootcom
How To was born two years ago out New York-based photographer Olivia Locher’s own series of kitchen mishaps and blunders. After misunderstanding hastily repeated recipes given to her by friends and acquaintances, she chose to forgo frustration and disappointment in favor of inspiration, constructing a set of images in which routine exercises are confused, mistaken, or exaggerated to the point where they become nonsensical.