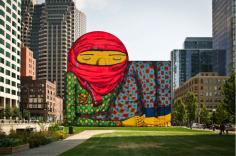 IT’S BEEN a year since the Brazilian street-art team of twin brothers Gustavo and Otavio Pandolfo, known as Os Gemeos (“the twins”), in conjunction with their exhibit at the ICA, painted their giant untitled mural in Dewey Square. The piece, part of the Rose F. Kennedy Greenway Conservancy’s program of temporary art installations, is scheduled to come down some time this fall. That’s too bad. This former lightning rod of post-9/11 debate deserves to become a permanent public installation. It has transformed not only an inert architectural structure (the air-intake building over the Route 93 tunnel), but also one of Boston’s most important public spaces, at the crossroads of downtown, the waterfront, and South Station.

Public art is a tricky business — in the open air, unlike a museum or gallery show, art is usually something we see by happenstance rather than choice. At worst, it becomes a blight. At best, we simply stop “seeing” what we don’t like. It becomes part of the unobserved background of our daily lives.

The Os Gemeos mural is not that kind of public art. Measuring 70-by-70 feet, in bright blues and greens and reds, it dominates Dewey Square. It’s not simply that you can’t miss it: You must look at it. Aside from the colorful patterning, the depicted figure itself commands the city-scape: a pajama-clad boy, huddled amidst the surrounding towers, peering out at us with eyes masked by a hood.

That hood provoked an evil stew of controversy last year, stoked by the folks at Fox 25. Following a TV segment on the piece, the news station asked on its Facebook page, “What does this look like to you?”, inciting a slew of nasty, racist invective. Even more moderate commentators wondered if a masked figure was the best image to place near the city’s major railway station.

I know the feeling. Back in late April, when I saw a young man downtown wearing a backwards baseball cap, all I could think was: “That kid must be nuts — he looks just like the Marathon bombers.” If clothes can telegraph a message about who we are, this was clearly the wrong one — a poor fashion choice whose expiration date was April 15. Soon enough he’d find out how all those Muslim women dressed in burkas feel.

The thing is, any direct encounter with the Os Gemeos mural belies terrorist associations. The child is clearly wearing a pajama top over his head (one sleeve even hangs down below his chin). What’s more, the posture of the image — crouched, squeezed into the box of the structure — suggests not a threat, but vulnerability. And the colors and patterning are anything but menacing — more like a celebratory shout.

The critical response to the work was near unequivocal. In the Globe, art critic Sebastian Smee called it “by far the most successful piece of public art I’ve seen in Boston in the more than four years I’ve lived here.” Smee went on to praise the piece, with its “delirious patterning and cartoon drawing” as “entirely unexpected and frankly joyous.” In the Boston Phoenix, critic Greg Cook wrote, “It’s the best large-scale public art in Boston in decades.”

The Greenway Conservancy is understandably circumspect about the possibility of the Os Gemeos mural becoming permanent. “Our focus is on temporary public art,” says Charlie McCabe, director of public programs for the Conservancy. The temporary displays follow Boston Art Commission guidelines in accordance with the Massachusetts Department of Transportation, which is the landlord of the Greenway property. The Conservancy’s 2012 five-year plan, which was developed with the assistance of public art consultants and a volunteer group of artists, curators, and funders, reinforced the notion of “temporary public art, working with a variety of artists and ideas.”

It’s true that breaking protocol would make the overall program less dynamic as well as create all manner of bureaucratic headaches — it’s much easier to approve a piece of public art when you know it’s going to be temporary. Still, this is a chance for the city to make a statement about itself and art that can serve as a touchstone for decades to come. And it’s not simply a statement that would serve art critics. One need only see the wowed tourists hanging out in Dewey Square, taking photos of the mural, to realize that this piece is sending out another message about Boston. It’s not about terrorism, and it’s not the usual Boston tourist references — the Red Sox, Paul Revere, the Freedom Trail. Yes, there’s something mysterious about that child, and a bit of a subversive edge in his improvised costuming. Towering over Dewey Square — the site of the Occupy protests of fall 2011 — he says something else about the city: its inclusiveness, its edginess, its capacity for joy.
.
.
.
.
.
.
.
source: untappedcities

Os Gemeos, which means “the twins” in Portuguese, is the mastermind collective behind several huge murals, including one on the side of PS 11 in New York City and a gigantic mural in Boston’s Dewey Square. Otavio and Gustavo Pandolfo, twins from Brasil, started their first art tour in the United States back in 2010, after erecting a rather noticeable urban art mural right in the heart of Downtown Boston, close to South Station. Along with the Institute of Contemporary Art, where they had their first solo exhibit in the United States, these artists have brought their art to the world.

“The Giant of Boston” is painted on a 70 by 70 foot wall and it features a hooded figure with a bright yellow complexion seemingly leaning against the wall itself, knees drawn into its chest. Donning a clashing green and yellow shirt with blue and red checkered pants, he provides a momentary distraction for commuters that divert their stares toward his squinted eyes that stare blankly westward onto the city.

ICA curator Pedro Alonzo was ecstatic with the opening of the mural in 2010: “I’ve seen people do triple-takes, they walk by and they’re like, ‘What!?’ And they keep looking back!”

The mural was met with some racially charged backlash in Boston, as many viewers were offended by accusations of the piece depicting a Muslim person dressed in a hijab. This feedback spawned a public statement from the American Civil Liberties Union last year: “The ACLU supports exercising freedom of expression, and that’s what the artists ‘Os Gemeos’ have done by getting a permit to create a mural depicting what the curator says is a little boy in pajamas with a shirt on his head,” explained Carol Rose, executive director. “The Giant of Boston” always had an expiration date, as news surfaced this summer that the mural will come down on September 9. The ICA had kept secret the name of the artist that would replace Os Gemeos’ “The Giant” until last week, revealing that abstract artist Matthew Ritchie will mark the beginning of his residency at ICA with the erection of his mural at the Rose F. Kennedy Greenway. “The experience was worth repeating,” reports the Boston Globe, “it created buzz throughout Boston and brought art to the public without requiring people to pay admission fees or even visit a museum.”