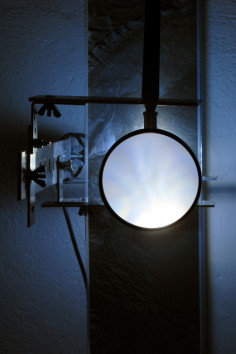 source: owenmundy
A Single Composite is a series of kinetic installations and projection apparatuses that stretch, twist, and loop film strips containing declassified and other found reconnaissance footage. Using reconstituted digital printer chassis, this cinematic enterprise is projected on walls, ceilings, and floors, to form a series of individual moments of surveillance and implied violence.

I am an artist, designer, and programmer. My research investigates public space, information privacy, and big data. I teach a range of subjects for both the study and production of data visualization, internet art, interface design, game design, and physical computing.

I am a former photographer in the US Navy where I unloaded surveillance film on the flight deck of an aircraft carrier. I have worked in journalism, marketing, and creative fields. I had a ten-year career in web and app development including the multimedia NEH-funded African Americans in Cinema history project. I co-founded Your Art Here, a non profit organization to put art on billboards and other public places usually reserved for advertising.

Recent work includes mobile and web-based apps and visualizations like illuminus.io, a research-based personality and risk analysis tool which appeared in the Peabody-awarded web documentary Do Not Track; the online viral big data visualization, I Know Where Your Cat Lives, which mapped seven million images tagged with #cat using the locations in the metadata users unknowingly uploaded to social media; and Give Me My Data, a tool that helped users export their data back out of Facebook. My work has been covered in The New York Times, The Atlantic, Time Magazine, NPR, and Wired Magazine and exhibited in multiple museums and galleries in New York, Berlin, Los Angeles, Rotterdam, and Mexico City. I have received numerous artist fellowships, a DAAD Arts Study Scholarship, and a Fulbright Fellowship. I am a Visiting Associate Professor of Digital Studies at Davidson College and an avid mountain biker.