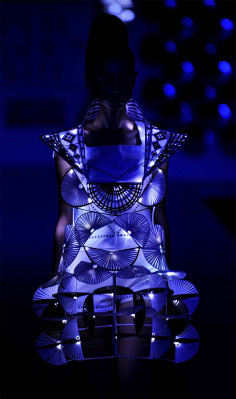 We are “Pankaj & Nidhi” and launched our label in May 2006. We fill our designs with spontaneity with generous use of colors, inspired by craftsmanship, symbolic and cultural objects.
Descrição
In our collections we strive to invent a contemporary language and create clothes that tell stories for women who love freedom.

We hope to share with you our journey in the world of fashion and give you an inside view of our design process.
.
.
.
.
.
.
.
source: pankajnidhi

Pankaj & Nidhi are a talented designer duo who launched their label in 2006.

Celebrated for their “fresh & crisp sensibility”, this powerhouse couple pushes the envelope when it comes to creativity and innovation. Their creations are charming and spontaneous, with a generous use of colors, inspired by craftsmanship, symbolic and cultural objects, Pankaj & Nidhi invent a contemporary language, create clothes that tell stories, for women who love freedom and authenticity and are always on a quest for originality.

They are the winners of the iconic International Woolmark Prize, 2012, India and compete for the International Finals at London Fashion Week in February 2013.

In August 2012, they were chosen as Grand Finale designers, a first for one of India’s younger talents, for Lakme Fashion Week where their collection was received with a standing ovation.

They have been honored with several Elle Style Awards, the most recent and most prestigious of which was Elle Designer of the Year 2012. The others have been Elle Shape Shifters for 2011, Elle Best Women’s Prêt-a-porter in 2009 and Elle Best Debutant Designer in 2008.

In October 2010 they also won the Grand First Prize at the International Apparel Federation’s International Fashion Award at the World Apparel Convention in Hong Kong.

The rise of the label has been nothing short of extraordinary. Retailing from the top stores of the country and also from two flagship stores, one in Crescent at The Qutab in New Delhi and one in Khar in Mumbai, they are one of the few labels in the country which have struck the right balance in winning critical acclaim as well as commercial success with their innovative yet wearable clothes.

Pankaj graduated with top honors from the National Institute of Fashion Technology (N.I.F.T.). He won the ‘Uma Nath Gold Medal’ for topping academics and the ‘Ritu Kumar’ Award for Best Graduating Collection 1995. He also won the first Smirnoff International Fashion Award in 1994.

After that, he worked with one of the India’s top designers, Rohit Bal as Head of Design for 10 years. During his tenure there, he met and married his colleague Nidhi, who is a bright and creative alumnus of N.I.F.T. She worked with one of India’s leading Export Firms, The Creative Group which designs & produces for some of the biggest labels in Europe.

They remain happily married for nine years now and are enjoying their firstborn, an adorable baby girl.