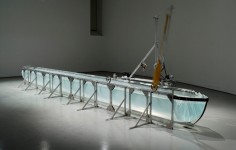 The work here in Dawson is like an old vehicle in which I’ve put a new engine. Entitled Canoe, it consists of an approximately 20 foot long trough of water, that resembles some kind of boat. This provides a means for a gunwales tracking mechanism to slowly, endlessly paddle its way back and forth. It was first constructed in 2001 in a studio beside Halifax harbour. It draws visual inspiration from the bridges and water vessels of this port. Conceptually, it grew from an interest in technological obsolescence: how things (like canoes) make shifts from utility to leisure.
It has experienced several major rebuilds since 2001. Most of them have been practical, but for Dawson I’ve opted for an experimental configuration that changes significantly the nature of the work. Previously, Canoe has only ever been shown indoors. Normally in runs on rechargeable batteries, with a continuous, smooth motion. In Dawson, it is shown outdoors, alongside the Yukon river, showing up in an absurd way the paleness of its artificial river. Here, the primary source of power is sunlight.
Making use of the long northern day, solar panels receive light, storing energy in an array of super-capacitor cells. At this time, Canoe remains still. A custom circuit monitors the amount of charge, and when a predetermined trigger point is reached, it is dumped into Canoe’s electric motor in a burst, allowing it to make a few strokes. Then Canoe rests, while the charging cycle begins again. Motion is intermittent, entirely dependent on the amount and intensity of sunlight. It ranges from near standstill in overcast conditions to perhaps 1 or 2 strokes every minute in full light. The technical term for this type of circuit is a relaxation oscillator. I like this term because, if you remove it from its technical context, it points back to ideas about leisure and utility.
I am seeing this whole project as an experiment. Canoe itself is a rigid, rules-based system of repetitive mechanics, preset circuitry and angular construction. I really like the idea of taking this type of system and placing it somewhere where it is effected and affected by factors that are not predictable or necessarily even known: elements, sunlight, the responses of passerby etc. Dawson is the ideal place for this experiment.
.
.
.
.
.
.
.
source: bekno

Artists, of course, have long been fascinated by natural systems. The notebooks of Leonardo da Vinci, for instance, are filled with sketches that reveal his intense preoccupation with dynamic phenomena… the way bodies work, the way rivers flow and clouds move, the way human faces change over time. Contemporary artists like Peter Flemming continue in this tradition, blending artistic and scientific curiosity. In fact, it was an innate interest in systems that led Flemming to art-making in the first place. His childhood instincts had already led him to experiment with the most adaptable and system-friendly materials that came to hand – Lego, Meccano and Tinkertoys – and it was music that provided the critical inspiration: The first machine I ever formed a relationship with was a piano. We had a piano in the house growing up (my folks still have it) and I was fascinated by plunking around on it from a young age. Eventually this led to conservatory lessons. I hated practising scales and other people’s songs, but I would spend hours just messing around making up my own stuff. Not just randomly, but based on some kind of invented pattern.1

Eventually his tinkering with systems manifested itself in electronic terms: I started playing guitar, and started collecting some guitars and amplifiers. This led to what I now think of as an early impulse towards “looking under the hood” or a physical engagement with machines: I would disassemble them, put extra strings on, repaint them and try to rebuild, modify or customise them, etc.2

Flemming’s choice of electronics and mechanics as experimental disciplines was fortuitous, for combined they provided him with a broad entry point into the understanding of behaviours intrinsic to systems. In particular, they led him to appreciate a fundamental principle, which is maddening to most people – the innate tendency of everything to go askew, become disorganised and fall apart. At the age of twenty-three, he undertook the building of an ambitious electro-mechanical project in homage to entropy: It started in a very broad sense, out of just being generally astounded at how everything is constantly under repair, because it is constantly falling apart. I was thinking in very simple terms of the things that were right in front of me at the time: my living space and its tendency towards disorder, the self-knotting qualities of cables and wires, the near constant roadwork in my neighbourhood in Toronto.3 [Its] initial working title was “Perpetual Mess Machine” which was meant as an antithesis to a perpetual motion machine, I discarded this title because I thought it was corny and obvious.4

Nine years later, revised many times and now re-titled, Flemming’s entropic masterpiece, Manual, is making an appearance at the Koffler Gallery. The work abounds with ironies: above all, it must celebrate entropy without unduly falling prey to it. Such is the dictate of exhibitions, where patrons and curators alike (understandably) prefer not to see “Out of Order” signs. The task might be easier if the work were intentionally self-destructive, following the precedent set in 1960 by the Swiss artist Jean Tinguely. But true entropy is better characterised as the disruption of human intention, and Flemming has chosen a more philosophical route: …in the long term, I embrace [breakdown] as inevitable. Though this can mean pain and frustration in the short term (i.e. when something breaks in the middle of a show in Sweden and you are in Canada). This can be a good thing too: a rough and bumpy ride keeps you on your toes, which is a certain kind of awareness that I can’t get from smoothness and slickness, when things go exactly as planned.5

The rough and ready aspect of Manual is all about function. Many parts working in harmony conspire to manipulate a common push-broom using the repetitive motions of a human sweeper. The machine’s task alternates between blatant anti-utility (depositing sand in piles around the gallery floor) and would-be utility (sweeping the sand back into a pile in the centre), thereby dramatically demonstrating that functionality and utility are not necessarily synonymous. Functionality here is a constant – complex mechanics running continuously – whereas utility is a widely swinging variable. That neither the “utilitarian” and “non-utilitarian” phases are executed perfectly adds to the artfulness of the work. The sand is in fact deposited in spiral precision, while the sweeping process is delightfully messy. This contradictory duality is reminiscent of the yin-yang symbol, where opposing forces, perfectly balanced, chase each other round and round, each carrying at its centre a seed of its counterpart.

Flemminq created Canoe while taking a break from Manual during 2000. This work, also on exhibit at the Koffler, takes us on a somewhat different artful voyage, although its conceptual foundations are consistent with the floor-sweeping piece. Again the artist has constructed a large and complex machine in which every component contributes to the functioning of the work. Again, an objective is to animate a simple, familiar utilitarian object with a repeating and rhythmical human gesture. And again Flemming probes nuances of utility, choosing for his focus a tool that represents an ironic departure from its original survival-based usage to a predominantly recreational modern-day one: the canoe paddle as a metaphorical device has a rich historical and contemporary presence. the canoe originated in native culture, its usage being generally practical as a means of travel and transportation. later, the canoe was appropriated by the coureurs-de-bois and played an important role in the expansion of the fur trade, still as a practical technology. at the turn of the 20th century the rise of industrialism spawned various back-to-nature programs, like the scouting movement and the summer cottaging movement. The canoe took on its contemporary role as leisure craft.6

Pushing this utility reversal several steps further into surrealistic portrayal, Flemming fills a canoe-like trough with water so as to provide a token pond wherein a gunwale-tracking mechanical human surrogate may paddle its way back and forth endlessly. The paddling gesture is not intended to be perfectly human-like: I try to downplay the “anthropomorphic” part of these works in a way, though that may seem contradictory to how they appear. They are meant as reductive representations of certain types of repetitive gestures, rather than elaborate mimicry (i.e. why I don’t have it doing a j-stroke, for example).7 Nevertheless, fluid dynamics insert a crucial verisimilitude in the way whirlpools are carved in the water in elegant replication of the canoeist’s craft.

In both works, Peter Flemming takes a wide-angle look at interacting social and physical systems. His artistic response depends upon an alternative literacy in which articulating mechanical and electronic components replace nouns, verbs and adjectives. This strategy allows him to characterise in fresh ways the cross-currents running through and between natural phenomena and human culture, and to liberate us, at least temporarily, from conventional preoccupations with utility.
.
.
.
.
.
.
.
source: headlands
Artist Statement
I make machine based installations. In the past few years they have been mainly about sound and resonance. Even more recently, in fact only in the last year or so, my working methods have been evolving from being more ‘plunk’ based (where I design and produce work, send it in a box and plunk it in a gallery) to a site specific practice, where I arrive with a plan and a toolkit, but proceed to develop the work mainly on site.
The primary draw to Headlands is having some relatively distraction free time to develop my work along these lines. To further integrate improvisational techniques into what I do, seeing the experience on one hand as a rehearsal for future work, and on the other as a chance to be in a very special place and produce things I wouldn’t have been able to do anywhere else.
While At Headlands
I will start to work on a new series of large scale kinetic sound installations inspired by resonance, biological cycles, simple chemistry and intuitive architecture. I don’t plan on finishing any exhibition ready work at Headlands, instead I will focus on making prototypes, maquettes and tests.
I propose to develop these installations as frameworks or schematics, rather than pre-determined finished pieces, learning to work in a way that is structured, but not scripted, involving a significant amount of improvisation, through the incorporation of local found materials and responding to site-specific architectural cues. This will eventually result in installation works that will spill organically into a space… unfolding in a tension between chaos and structure, mess and design, felt in the body.
.
.
.
.
.
.
.
source: bekno