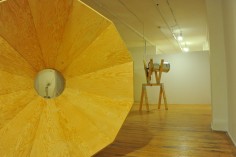 Work: All things have a natural resonant frequency. Intriguingly, this suggests a baseline connection between just about everything, but let us remain at the level of the physical. Water in a wine glass vibrates intensely when a finger is drawn along the rim. Our bodies have resonant frequencies; so too does the stapler on my desk, the skyscrapers downtown, the bridge I cross when leaving Montreal, and the tectonic plates that support it all. Inspired by this resonance, Instrumentation is a site-variable, kinetic sound installation. Upon entering the main installation space, one hears a shimmering polyphony of harmonics, sudden crescendos and arrhythmic beats. At odds with the elegance of these sounds are the unlikely resonators from which they emanate, cobbled together from scrap wood, clamps, buckets, drums, salvaged windows and hand-wound electromagnetic coils. Further exploration reveals a secondary room containing the source of the performance: an array of small mechanical devices and seemingly haphazard circuitry. A large wooden table serves as a stage for these non-human performers: a lever pulls a string fixed to an electrode plunger in a jar of electrified saltwater; a light dimmer’s dial turns slowly under the control of a small motor; vibrating electromagnetic fields sound piano wires and create percussive pulses in drums and metal cans; yogurt lids pinned to sticks sway to and fro over light sensors. These elements combine to spontaneously compose Instrumentation’s hypnotic chorus. To create vibrating magnetic fields I use simple oscillator circuits, rare earth magnets and cheap or hand-wound electromagnetic coils. These fields sonically activate a range of material such as scrap glass, metal objects, and tensioned wire. Light-sensing photocells on the circuits enable the frequencies to be varied by ambient light levels, regulated by the mechanical performers—motorized light-dimmer devices and automated light-blocking shutters. Held together with paperclips, blue-tack and hot melt glue, the makeshift appearance of the arrangement preserves a sense of the experiments from which it has evolved. The overall aesthetic is open, in that the underlying technology has been left as transparent as possible. Though they may be used in unfamiliar ways, cues come from familiar items; like sewing machine bobbin electromagnets or garbage can resonators. Coupled to the compelling sound, domestic parts provide an immediate bodily engagement with otherwise intangible phenomena. A primary goal I have as an artist is to build systems that I do not fully understand, with behaviours I cannot fully predict. In Instrumentation cycles overlap, synchronize and step out of phase, collectively generating an endlessly fluctuating sound track. The repetitive actions of each performer are a manifestation of the clock, the fundamental digital device. I chose to work directly with the clock as a building block, slowly constructing complexity in layers. This contrasts an approach of first building an entire computer around the clock signal, then working back through complicated software processes in order to artificially re-introduce elements of surprise or chaotic behaviours. With Instrumentation the algorithmic behaviour is found in physical objects and not abstract code. Along these lines, I conceive of Instrumentation as more of a framework or schematic, rather than a fully individualized, or closed work. Structured but not scripted, the work contains a high level of improvisation, and so varies significantly from implementation to implementation. By letting machines run the show, I hope to open up a temporary space for contemplation of the forces at work in the environment that surrounds us. Exploring the physical ‘magic’ of resonance that pervades our everyday encounters with machines, structures and systems, reveals that we are subject to fundamentally mysterious material laws, that are outside our absolute command. In an increasingly digital-technocratic world, where capture, efficiency and analysis seem to be the only goals, acknowledging this elusive latent ‘magic’ can remind us of the limits of our control.
Photographer: Conception photo
.
.
.
.
.
.
.
source: skol

All things have a natural resonant frequency. This intriguing idea suggests a baseline connection between just about everything, but I’ll keep to the physical for now. My old car would vibrate intensely when reaching certain speeds. Our bodies have resonant frequencies. As does the stapler on my desk, as do skyscrapers, bridges, tectonic plates…

Instrumentation is an electro-mechanical sound installation inspired by resonance. The gallery installation preserves a sense of the makeshift, having evolved from studio experiments, using a limited palette of tools and readily available materials. Spanning the two rooms of Skol, different aspects of the work are presented in each.

Unlikely loudspeakers improvised from buckets, drums, salvaged windows and hand-wound electromagnetic coils occupy the main room. These found-object resonators amplify the remainder of the installation situated in the back-room. Here, a plywood work-table serves as an acoustic transducer for electromagnetically activated piano wires, and as the main staging area for an assembly of machine ‘performers.’ Each lethargically performs a repetitive task, contributing to an endlessly fluctuating sound track of shimmering harmonics, sudden crescendos and arrhythmic beats.

By letting machines run the show, I hope to open up a temporary space for contemplation of the forces at work in the environment around us. Exploring the basic physical ‘magic’ of resonance, present within our everyday machines, structures and systems, reveals that we are subject to material laws that are fundamentally mysterious and outside of our absolute command. This elusive ‘magic’ is a worthwhile reminder that we are not in total control in a digital-technocratic world where total control seems to be a goal.

I look at what I make as the electro-mechanical equivalents of short stories. Naturally, every good story needs some tension to keep it going. In my machinic ‘texts’, I try to create tension by intermixing different systems. Organic ones blend with technological ones, the old with the new, and the handmade with the machine-made. And rather than words, sentences and paragraphs, I use bolts, batteries, metal, and custom electronics. Mistakes and accidents frequently shape the course of my artwork. They typically occur when I have met some kind of technical or financial limitation, or some material quirk asserts itself contrary to my aims. After much hair pulling, occasionally I realize that the unintended behaviour is interesting in itself. I drop the original goal and pick up a new path, letting it lead me along instead of trying to bend it to suit pre-determined criteria. Knowing how to read these hidden signposts as they reveal themselves is a crucial part of my process.
.
.
.
.
.
.
.
source: headlands

Artist Statement
I make machine based installations. In the past few years they have been mainly about sound and resonance. Even more recently, in fact only in the last year or so, my working methods have been evolving from being more ‘plunk’ based (where I design and produce work, send it in a box and plunk it in a gallery) to a site specific practice, where I arrive with a plan and a toolkit, but proceed to develop the work mainly on site.

The primary draw to Headlands is having some relatively distraction free time to develop my work along these lines. To further integrate improvisational techniques into what I do, seeing the experience on one hand as a rehearsal for future work, and on the other as a chance to be in a very special place and produce things I wouldn’t have been able to do anywhere else.

While At Headlands
I will start to work on a new series of large scale kinetic sound installations inspired by resonance, biological cycles, simple chemistry and intuitive architecture. I don’t plan on finishing any exhibition ready work at Headlands, instead I will focus on making prototypes, maquettes and tests.

I propose to develop these installations as frameworks or schematics, rather than pre-determined finished pieces, learning to work in a way that is structured, but not scripted, involving a significant amount of improvisation, through the incorporation of local found materials and responding to site-specific architectural cues. This will eventually result in installation works that will spill organically into a space… unfolding in a tension between chaos and structure, mess and design, felt in the body.
.
.
.
.
.
.
.
source: lapresse