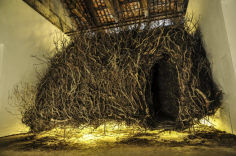 Petrit Halilaj (b. 1986 in Kostërrc) was too young to remember the Berlin Wall falling but just old enough to remember all too well what came in its wake in what quickly became the ‘former’ Yugoslavia: ethnic conflict, war, forced exile, corruption, loss. Having fled with his family to a refugee camp as a young boy during the conflict in Kosovo, Halilaj’s history is as inseparable from war and exodus as is his oeuvre. Much as he may mine his experience, he rejects pathos or nostalgia for something at once far more optimistic, materially complex, politically resonant and, ultimately, critical. From the start, his use of commonplace materials and childhood memories has been an attempt to understand what such notions as ‘home’, ‘nation’ and ‘cultural identity’ could mean. His frequent combinations of earth, rubble, wood slats, live chickens and delicate drawings evoke a world at once intimately personal and utopian, all while revealing the inevitable realities of a far wider sociopolitical sphere. A bit like Joseph Beuys’s felt and fat, Halilaj’s mnemotechny of homeland and homelessness is not documentary, strictly speaking, but it is not romantic either. Instead, it walks an elegant tightrope between memory and actuality, the ingenuous and the fictive, the infinitely personal and commonly shared experience.

For the artist’s first exhibition in Belgium and his largest solo show to date, Halilaj extends his ongoing excavation of the Natural History Museum in Kosovo, a formerly remarkable and well-loved place before splintered nationalisms disintegrated what was once called Yugoslavia. At WIELS, he presents a vast, new installation comprised of a film that portrays the state of the ‘lost’ museum, along with a series of hand-sculpted copies of its animal remnants, based on a collection of found photographs and documents portraying the state they were in before they were removed to make way for a more nationalistic display of folk tradition and heritage instead. Halilaj’s new project attempts to give the museum and its specimens another life and a renewed political resonance.

Petrit Halilaj (b. 1986 in Kostërrc; lives and works in Berlin, Kosovo, and Mantova) studied art at the Brera Academy in Milan. His work has been featured in solo exhibitions including: Pavilion of the Republic of Kosovo at the 55th Venice Biennial, 2013; Who does the earth belong to while painting the wind?! (Kunst Halle Sankt Gallen, 2012) and Petrit Halilaj (Kunstraum Innsbruck, 2011); as well as in group exhibitions, including: The New Public (Museion, Bolzano), It doesn’t always have to be beautiful, unless it’s beautiful (The Kosovo Art Gallery, Prishtina), Lost and found (a nomadic initiative for contemporary art, Antwerp), 30 Künstler/30 Räume (Kunstverein Nürnberg/Albrecht Dürer Gesellschaft, Nürnberg; all 2012), Ostalgia (New Museum, New York, 2011) and the 6th Berlin Biennale for Contemporary Art (Berlin, 2010).
.
.
.
.
.
.
.
source: frieze

During the Kosovo War of 1998–9, drawing materials were distributed to children in a refugee camp in Albania. Each child was offered one coloured pencil. But Petrit Halilaj, age 13 or so at the time, insisted on having two, explaining to an aid worker that he was ambidextrous and could draw simultaneously with both hands. Soon, other journalists arriving at the camp to report on the war or the conditions of refugees began documenting the young artist who could render parakeets, roosters and chickens with two hands.

This is a remarkable story. Narratives like these – poignant, loaded, somewhat apocryphal or off-kilter – frequently serve as backdrops to the Kosovar artist’s works, which incorporate or re-create the physical artefacts of his past. The master script here is autobiography, for which Halilaj’s unorthodox life provides colourful, complicated fodder. In Kostërrc, his work for Art Basel Statements in 2011, he transported a cross-section of land from his family’s property in Kostërrc to fill Chert gallery’s booth. Since part of the work is also a booth-sized hole in the village where the artist was born, only half of the piece was on view in Basel: green and yellow grass rested on a smooth layer of sludgy dirt, which covered debris on a lower stratum that inevitably recalled images of decaying bones or even ossified crimes. The work visualizes history as a geological stratification; at the same time, its dual metaphor of physical transport dramatizes the artist’s own story of migration. The grass on the top layer offered an image of hopefulness.

After Kosovo, Halilaj studied in Milan and he now lives between Berlin, Bozzolo in Italy, and Pristina and Junik in Kosovo. The fact that the artist will represent Kosovo at its first pavilion at the Venice Biennale this year seems to neatly solidify his case as a feel-good success story: a young artist who has, against great odds, been able to exhibit compelling, highly personal sculptures and installations on an international stage. His piece at the 6th Berlin Biennale in 2010 was a slightly larger reconstruction of the scaffolding erected when his parents rebuilt their house in Kosovo after returning to their then-levelled home after the war. Titled The places I’m looking for, my dear, are utopian places, they are boring and I do not know how to make them real, it included live chickens, lending an eerie, living sense of reconstruction to the work’s exposed wood structure. Chickens, in fact, often reappear in Halilaj’s work: take the series of drawings ‘Bourgeois Hens’ (2009–ongoing), or They are Lucky to be Bourgeois Hens (2008), in which Halilaj lived with chickens in a house built in a children’s playground as part of the group show ‘Art Is My Playground’ at Küçük Çiftlik park, Istanbul. Such works refer, via analogy, to Halilaj’s real subject: himself, as objectified as any zoo animal.

If only such a story – grazing, migration, domestication – were ever that easy, for Halilaj or for the viewer. It’s never clear how much autobiography should bear on evaluations of an artist’s work. Some outline of a real person always hovers nebulously over the act of viewing, pecking at our illusions of a piece’s hermetic wholeness. In Halilaij’s case, this idea is taken to the extreme. An uneasy pathos often ensues. The fact that he reappropriates actual childhood drawings of the kind he drew before the Kosovo conflict in installations such as Several birds fly away when they understand it (2012) complicates the narrative: the colourful bird images are connected via steel ropes into a room-size, somewhat hyperbolic ‘network’. Seemingly caught up in a gust of wind, the sweeping installation enacted the transience of naïve images amid the persistence of such myths as ‘childhood’, ‘author’ and ‘home’.

Halilaj seems fully aware of the complications his work brings with it – the inevitability, say, of voyeurism or exoticization on the audience’s part – yet he has chosen to provoke, and move, via the sure-fire capital of his biography. In other cases, one might be able to subsume biography into the happy realm of auto-fictionalization. When, however, the life in question includes war, ethnic conflict, forced displacement and reconstruction, to cleanse the works of their narratives is to render historical particularity a mere commodified, exchangeable myth – or else erase it altogether. The two large-scale sculptures It is the first time dear that you have a human shape (2012) – modelled after the artist’s mother’s earrings – are unhinged, like a circular history broken open: they spew copper-coloured powder that Halilaj ground from his ruined family home in Kosovo. Home, like an author, is both a metaphor and a physical thing. Perhaps Halilaj’s real endeavour is to remain perpetually homeless, as ethereal as powder, or to at least close the loop on an audience just before he arrives there. And, until he does, we can value these works for the cramped corners they force us into, the very discomforts they provoke.

Petrit Halilaj lives and works in Berlin, Germany; Bozzolo, Italy; and Pristina and Junik, Kosovo. He will represent Kosovo at the 2013 Venice Biennale. His solo exhibitions in 2013 will take place at WIELS Contemporary Art Center, Brussels, Belgium (opening in September) and the National Gallery of Pristina, Kosovo.