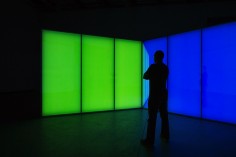 Phillip K Smith III received his Bachelor of Fine Arts and Bachelor of Architecture at the Rhode Island School of Design. He continues to push the boundaries and confront the ideas of modernist design. Drawing inspiration from the cold rigidity of the Bauhaus movement, the reductive geometries of minimalism, and the optic sensation of California’s Light and Space movement, Smith III attempts to resolve the complex challenge of finding a natural state of life and spirit within these ideological aesthetic constrictions, the results are deceptively simple and compelling objects that seem to breath and move as you observe and interact with them.
He has been commissioned to create over half a dozen monumental art works, from California to Missouri and was featured in the 2008 annual review in Art in America. He is currently in development of six public works to be installed by the end of 2012 in California, Arizona, Virginia, Tennessee, and Oklahoma. His fifty-five foot tall sculpture, “Inhale/Exhale“, is featured on the cover of the book 500 x Art in Public: Masterpieces from the Ancient World to the Present alongside some of the most important artists of our time. He was honored as the 2010 Artist in Residence at the Palm Springs Art Museum and was included in the exhibition, Smooth Operations: Substance and Surface in Southern California Art, alongside artists such as Peter Alexander, Larry Bell, DeWain Valentine, and Craig Kauffman at the Museum of Art and History in Lancaster, CA. Smith III was subsequently offered a solo exhibition at that same institution. In October 2013, he launched a project titled “Lucid Stead” in Joshua Tree, CA. This installation became an international phenomenon receiving tremendous attention both online and in print media worldwide. Architect Magazine listed it as one of the “Very Best Projects of 2013” and the Los Angeles Times named Smith III as one of the three “Faces to Watch in Art 2014”. In April of 2014 Smith III launched “Reflection Field,” a colossal light installation that once again landed him in the Los Angeles Times with a full-page article about the installation, Smith, and his practice. He has since been commissioned to create a permanent, light-based installation for the City of West Hollywood and has been invited to an artist residency program at Dartmouth College that some of the most innovative artists of the last century completed including Robert Rauschenberg, Frank Stella and Donald Judd.