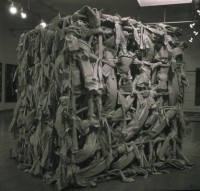 There is an intrinsic tension to Bad Copies. Phyllida Barlow is at heart a sculptor; a creator of large three-dimensional objects and installations; and yet this exhibition presents only drawings. Despite this, Bad Copies is still very much about sculpture: sculptural concerns and questions are explored in every one of the drawings. Yet in presenting only these two-dimensional works an intriguing space is created in which Barlow’s practice can be contemplated without the physical immediacy of her large sculptures being actually present. Thus the possibility of a quieter, more reflective consideration of her practice is made possible.

The drawings displayed in Bad Copies span six decades, going right back to Barlow’s time studying at Chelsea and the Slade. As one would expect, there are significant changes and evolutions over such a long period. However all the drawings share an overarching exploration of object, presence and space with line and mark making often apparently pushed into being secondary considerations.

The forms and shapes so familiar in Barlow’s sculpture echo across the works. Importantly though, Barlow is adamant that they are neither plans nor illustrations of her sculptures (*). The drawings explore the same terrain as her three-dimensional works but are also distinct, separate investigations in and of themselves. Experimental making without a predetermined or designed outcome is integral to Barlow’s sculpture, so it is perhaps unsurprising that her drawings are allowed to evolve with this same freedom.

Barlow makes sculptures and installations that demand to be physically engaged with. Her sculptures are never placed on pedestals, and eschew the didactic and monumental. Paradoxically though, they can often be very large and imposing. This contradiction is central to her work: she creates size and scale, yet simultaneous ephemerality and lightness. In part this is achieved through inherently unmonumental materials, which are often either salvaged or easily and cheaply purchasable. Draping fabric also softens many of the sculptures.

Lattices, meshes and other hollow constructions feature prominently. In being formed this way, the sculptures manage to occupy an extensive area quickly and efficiently, but often allow partial views through the work. Their size means the viewer is pushed into almost uncomfortable proximity with the sculptures and must pick a route through and around them. This forced interaction highlights Barlow’s desire to challenge previous generations of sculpture where imposing constructions were separated from and elevated above the viewer on pedestals. Even the New Generation sculpture of the 1960s maintained too much monumentality for her: despite their non-traditional materials and methods they still conveyed assumptions of ‘finishedness’ and were inherently objects to be looked at.

In contrast, Barlow’s sculptures are recycled, evolving constructions, often largely made in-situ. Until relatively recently the materials from each work would be taken apart and recycled into future pieces. Each installation is constructed quickly with no attempt to conceal the hand of the maker. And the sculptural elements do not stand in isolation but instead coalesce into claustrophobic compositions through which the viewer must pick a path. And only in that unique route through each work’s series of unknown angles and viewpoints is meaning produced, as a collaboration between artist and viewer.

Barlow’s practice oscillates between abstraction and representation. The sculptures are very much ‘things’ rather than ‘representations of things’ (something also true of many of the drawings in Bad Copies), but they repeatedly bring to mind architecture and interiors. Forms signifying boundaries such as fences and barriers are especially prevalent, and frequently occur in the drawings too.

A further contradiction that Barlow’s work contains is one of gender. The installations can seem simultaneously both very male and very female. The use of soft material forms and draped fabrics can convey a sense of femininity, while the hard metal, concrete and industrial processes can suggest masculinity, often in the same work.

Returning to Bad Copies, many of these same dialogues and contradictions can be clearly seen. The drawings are not ‘illustrations of sculptures’ engaging with their concerns, but a parallel investigation of them on paper. These works seem even more raw and instinctive than the sculptures: whereas the sheer size of the latter means they are constructed with a team of assistants, the drawings are created by Barlow alone in her drawing studio in the privacy of her own home, so can be much more private, personal investigations.

The earliest works on show, fine coloured pencil depictions of arrangements of abstract forms on a plane, prefigure Barlow’s interest in challenging the idea of the singular sculptural object. Like her subsequent installations, these are groupings which interact with one another emphasizing relationships rather than the individual.

There is a familiarity to many of the forms pictured. We are constantly reminded of domestic interiors and streetscapes, yet the shapes generally retain a degree of abstraction. The exception to this is a series of diagrammatic renditions of interiors made in the mid 1970s which are the least interesting works on show. Aside from the lack of abstract/representational ambiguity, the pencil markings seem to speak of time and labour and thus lose the sense of unresolved freedom and spontaneity that the other drawings have.
.
.
.
.
.
.
.
source: guardiancouk
Phyllida Barlow once said the best way to look at sculpture was in the dark. She wasn’t being derogatory, though, as Barlow believes that it’s only when the sculpture’s image has disappeared into the blackness that the chill of its presence can be felt.
Considering the size of some of her constructions, it is hardly surprising that she talks of physicality; some of Barlow’s works are colossal, scraping ceilings and straddling the width of a gallery. Visitors are often confronted with towering, tottering forms that they are compelled to navigate a bit like an unstable building site. Her mottled assemblages are nearly always fabricated from detritus – from wooden palettes to plastic wrap – and splattered in paint and Plaster of Paris. They look like a health and safety nightmare – recent works are covered in so much red tape that she could conceivably be making a joke of this.
Barlow studied at Chelsea School of Art and the Slade. At Chelsea she was taught by George Fullard, whom she describes as a brilliant visionary who rejected traditional methods of stone carving and clay, and sent his students off to forage for materials on the street. When she emerged from art school in the mid 1960s, it was into a world enthralled by the heavy metal boys led by Anthony Caro. Her scavenged structures, first built due to economy, were more human than these monstrous statements of steel and might. One of the legacies from those pop art days is her use of brightly coloured household paint, slapped on to bits of wood that are then built into rickety scaffolds. What is unusual is that Barlow invariably dismantles her sculptures after an exhibition and recycles the materials into other works. It is perhaps this cyclical arrangement that impresses on each work a sense of history.
She has described her sculptures in the past as “bad copies” of something she once had a relationship with, be it emotional or physical. From a battered cardboard shelter to a precarious configuration of spindly legs supporting a flabby roof of tarpaulin, Barlow purposely disfigures her memories into fantastical structures that look like the remains of an embattled planet.
Why we like her? For Stack, 2008, a looming pile of painted wood slats commissioned for the Royal Festival Hall last year.
Learning curve: Barlow has taught in art schools for over 40 years, and her students have included a roll call of Turner prize winners and nominees including Rachel Whiteread, Douglas Gordon, Tacita Dean, Steven Pippin and Tomoko Takahashi.