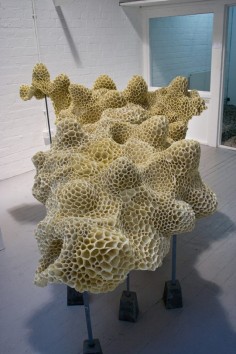 source: piamannikkowordpress
Artist Statement
The starting point for my work is the body and space, whether intimate or architectural. Movement and volume of the human body is my source of reference and research. I am interested in spaces we occupy and the personal space of an individual, as well as ideas of micro- and macrocosms.
Mapping time and attempting to make its patterns visible is also an important concept within my work. Making as a process, creating objects that gradually grow and change is central to my practise. I hope that the playfulness that the working process can give me is accessible also in the end result.
.
.
.
.
.
.
.
source: televisionbreak
Helsinki-based artist Pia Männikkö observes and recreates physical paths of the human form, depicting small intervals of movement within a space, in her Déjà Vu series. Using tulle fabric and ink, the artist presents a series of ghostly silhouettes cutting through different rooms, as though each flowing panel is a moment frozen in time. Altogether, each site-specific installation exhibits the trail of one man moving from point A to point B.
Normally, physical footprints aren’t left behind everywhere we walk, so it can be difficult to know the precise areas our bodies have inhabited, but Männikkö’s creations give us a better idea of the human body’s movement and physical space capacity. They allow us to contemplate how often we retrace our steps without even realizing it.
.
.
.
.
.
.
.
source: amazingworldpictures
Helsinki-based, artist Pia Männikkö observes and recreates physical paths of the human form.
Sisäänastuja point for thin transparent tyllikankaille ink painted human figures mode.My very first scene between the two characters, but the work is converted and live, when its over, around and lomitse walks.
As Männikkö itself descriptive, the question is, how the human body to fill the space.Experience the book in front is a combination of a very strong spatiality, like the physical and visual. With a gentle stream of air moving material, movement, changing position, repeating the transparency of the interview and direct the viewer’s body will be felt in the elements. The work is fine, at least to me, the whole Nyt2011 the best!Sarah Huovinen Performance body work on the same theme. While the Männikkö body image mode, Huovinen reveals it in motion and in the air. The work consists of many tiny rectangular pieces, which is printed on archival photos of past decades pole vaulter.The complex is composed parveksi. I started from the left line with the direction of the familiar figure. Meters after the first, I thought that this would be very nice and a great big living room wall, but I did not invent arguments entity in an art gallery. The middle after getting the situation was quite different.
I’d look carefully every jump shot. All have a unique moment business series, run a significant part of the human body tense up, straightens, folds, straightens out, fall off, rising, rising, falling, flying, gliding, dancing, spinning … small images surrender takes almost hypnotic state, where sports performance and pole vault context is missed and leaving only tempt the body’s flight.
The last photo is like a hypnotist sormennapsautus: it returns the event in perspective, showing the bar and mount, pole, as well as the performance of the mass of people.