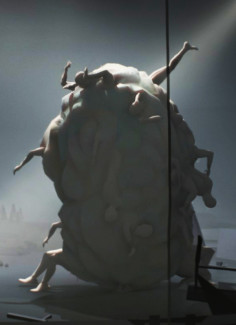 One of the last greats in that era was Limbo, one of the best indies of 2010. That haunting, wordless game smeared its black-and-white world with a smoky blur and a preoccupation with death, and the results were visually and emotional staggering—but they had less impact in terms of gameplay. Its side-scrolling puzzles were occasionally clever, but they were there not so much to bend the player’s mind as to spread out the pacing of the game’s somber tale of a brother and a sister.

The Danish team at Playdead took its time crafting a follow-up game, and they could have spent those six years inventing a more innovative gameplay hook. But that’s clearly not where their hearts are. Instead, these Danes have returned with Inside, a side-scrolling journey that once again doubles down on atmosphere over puzzles—and is all the better for it.

Though Inside was revealed at a Microsoft press conference in 2014, the game went into PR hiding up until a few weeks ago, when the developers snuck the full, finished game into critics’ inboxes shortly before this year’s E3. Having lost track of its development, I wasted no time installing and playing the game—and am all the happier for not having looked up any videos or interviews about what I was about to play.

My familiarity with 2010’s Limbo was guidance enough for what I was about to get into, and I therefore encourage anybody fond of that game’s choice of atmosphere over challenge to close this browser tab, wait for the game’s release date (tomorrow, June 29 on Xbox One, and Thursday, July 7 on Windows PCs), and jump in blind. That information, and the screenshot gallery above, should whet the target appetite.

But this is still a game worth talking about and scrutinizing without spoiling its most striking, memorable moments. For one, Inside does something I’ve never seen in a puzzle-platformer: it sells a complete, inexplorable world. Limbo, for all its beauty and its occasional depth-loaded scenes, was mostly flat, assumedly to sell the charcoal-and-ink aesthetic as something drawn by hand.

Playdead clearly wanted to be freed of that dimensional trickery, as Inside’s forests, prairies, swamps, research facilities, and towns are no slouches for depth and detail. The devs have aimed their game’s camera at a high, level angle and cranked the view distance up to a remarkable degree. You’ll see tiny, terrified people running across the horizon or cars’ bright headlights winding up and around lengthy streets, all while your in-game character—an unnamed child with no discernible eyes, lips, or other facial details—is cruelly forced to run either forward or backward on a 2D plane.

I found myself routinely cursing Playdead for forcing me to follow a rigid running track, which would occasionally curve around so that my character could logically navigate some of the 3D scenes, because I felt so wholly absorbed by the world the devs had created. Think of Inside’s engine as the artful, European, indie version of how good this April’s Quantum Break looked. Reflections and light sources bounce realistically off of every object in the world, all boosted by some of the most haunting light-placement direction I’ve ever seen in a video game. Rain drops, water splashes, flashlight trails, and foliage effects animate in crisp, consistent fashion.

And your main character, in spite of being rendered with no facial details, comes off as truly alive, curious and terrified by the world he traverses. Then again, your faceless hero is also brought to life in tremendous fashion by the game’s audio work. From voices to sound effects to background musical tones, Inside does a lot to sell this already-beautiful game world. Breathlessly panting one minute and gathering himself in a panicked hiding place the next, your character never leaves you wondering how he’s feeling, and every creaking door, snapping branch, rustling car, and mechanical factory turn will have you on the edge of your gameplay seat—all bolstered by the kind of ambience-boosting, droning background noise that shouldn’t be called “music” but definitely deserves to be celebrated as a “score.”