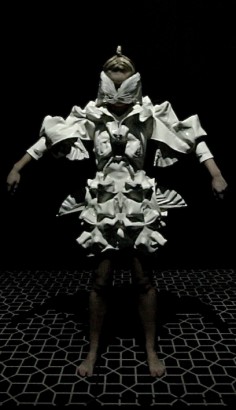 ‘Obstruction’ by Po-Ting Lee is part performance and dance, part sculpture and wearable; it reacts with light and shadow, picked up by sensors, created through movement. ‘Obstruction’ is an observation by Po-Ting Lee of the living environment through the body. The work was developed with Maartje Dijkstra, and is part of a collaboration between V2_Lab and the National Taiwan Museum of Fine Arts.
.
.
.
.
.
.
.
source: v2nl

Po-Ting LEE is a Taipei-born new media artist. He has an almost incurable condition of Thalassemia and this is the main context for his creations. LEE studied sculpture in the Taipei National University of The Art. His works then were chiefly kinetic/installation and as well as sound works. LEE is currently studying at the Graduate Institute of Arts and Technology in Taipei National University of the Arts. In his work, he attempts to combine kinetic installations and sound.

In 2011, LEE and his friends formed the interdisciplinary art group XOR. The group created an interdisciplinary interactive performance and performed at the opening ceremony of the 6th Taipei Digital Art Festival. Since then, they have been collaborating with various choreographers and fashion designers, and still seeking for new collaborators to extend the possibilities of their art.
.
.
.
.
.
.
.
source: behance

OBSTRUCTION is a high fashion technology/performance project that is created by performance artist Po Ting Lee(TW) and fashion designer Maartje Dijkstra (NL) The dress, which is designed for a dancer, is questioning if technology is always a positive thing, translated as a black and white projection. When the dress is hitting the dark parts of the projection, sticks will be coming out of the dress that obstructs the dancer to move. When it is hits the light the sticks will go inside and you have the freedom again to move.
.
.
.
.
.
.
.
source: maartjedijkstra

A Dutch fashion designer based in Rotterdam.

She studied at ARTEZ/HKA Arnhem The Netherlands, where she graduated as a Bachelor in Fashion Design in 2006. In 2005 she did an internship at the company of Alexander McQueen in London, where her interests in High fashion developed. In 2007 she started her own High fashion/couture label, where she designs and creates individualistic, sculptural, progressive, hand-crafted fashion collections, accessories and illustrations.

The designs of her (small) spherical collections are all handcrafted, unique, high fashion pieces, designed with the future in mind, made by her only. Her work has many manual details and is also very recognisable by her surreal hand-drawn illustrations. Imagination, electronic music, progressiveness and individuality are a big source of inspiration for her. Especially music/sounds are an important factor in creating her work and became more important because of the environment she now works in. A house with studio’s where music composers create amazing sounds like jungle/breakcore and ambient, so it becomes almost a melancholic place to work.

Next to exhibitions and fashion technology projects, she is most focused on making collections for the runway. For her this is the ultimate exhibition place, especially when every piece of the collection, models and the surrounding idea’s in music and animation come together.

In 2008 she did her first big show at the Amsterdam fashionweek, salon presentation, where she proudly presented her collection ‘Illustre Shoemachine’. After that she showed the second collection named ‘Bulged Being’ and is now busy finishing her latest collection Reflect Horridus.