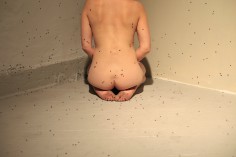 Poppy received a BA (Hons) in Visual Performance from Dartington College of Arts in 2005, and later earned her MA in Performance Making from Goldsmiths University. Her work has been supported by Arts Council England and the British Council and presented internationally, including at The Barbican and Whitechapel Galleries (London), Arnolfini (Bristol), Black Box (Belfast), Project Arts Centre (Dublin), Kunselforum (Cologne), Fluxus Ministeria (Kaunas), FEM Festival (Girona), Museum of New Art (Detroit) and Grace Exhibition Space (New York). Poppy was recently guest editor of BLUD ZER0 Collective’s first E-Zine and her written work will be published in the ‘OUI Performance Book’ later this year.
Poppy acts as a mentor to graduates from Norwich University of the Arts and has been invited to teach, present talks and give workshops at arts spaces and universities. She regularly curates events and facilitates professional development projects for emerging artists. She is Project Director of Liminal Bodies, the international network of nomadic artists; she also runs Site Space, a monthly site responsive event. Poppy is an Associate Artist of ]performance s p a c e [ in London.
.
.
.
.
.
.
.
source: thisisliveartcouk

Poppy Jackson is an action-based performance artist whose lifestyle, means of research and artistic output is defined by a nomadic existence. Movement is the key principal that underlies all her work. She has relocated continuously across England, Northern Ireland, Scotland, Spain, France and California and has lived aboard a boat, in a hotel, a derelict building and in a van. Her work seeks to identify a space for herself within unfamiliar territory, navigating the local context, laying down markers and exploring the crossing of thresholds. Poppy acts as a Mentor for recent graduates within the field of Performance Art, and has organised and led workshops and performance events for emerging artists in Dublin and London. Since graduating from Dartington College of Arts, her work has been presented at The Barbican Arts Centre and Whitechapel Art Gallery, London, The Detroit Museum of Modern Art, 18th Street Art Center, Los Angeles, Project Arts Centre, Dublin, Black Box, Belfast, and The Arnolfini, Bristol.