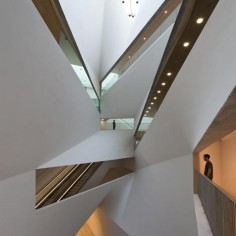 Over the past year, we’ve been following the development and early construction of Preston Scott Cohen’s Tel Aviv Museum of Art Amir Building. The 195,000 square ft building has recently been completed and now, the museum is open to the public. The $55 million Herta and Paul Amir Building will provide the space needed to permanently display one of the world’s largest collections of Israeli art. From its earlier beginning in 2002, Preston Scott Cohen’s proposal has been further developed and refined, culminating in the strong geometric aesthetic typical of Cohen’s design ideas. Paul Amir, a philanthropist who, with his wife Herta, has provided the naming gift for the building, stated, “We feel privileged to have been able to advance the work of the Tel Aviv Museum of Art, an institution that is truly at the heart of Israel’s creative community. With this exceptional building by Preston Scott Cohen, and with the ability to showcase the work of Israel’s artists as never before, the Museum now has the potential to step up to a prominent new role on the international scene, to the benefit of everyone.”

As we have previously reported, the building has five levels – two above grade and three below – which subtly twist to connect the disparate angles between the galleries and the context while refracting natural light into the deepest recesses of the half buried building. Preston Scott Cohen explained, “The Museum’s program set the challenge of providing several floors of large, neutral, rectangular galleries within a tight, idiosyncratic, triangular site. The solution we proposed was to ‘square the triangle’ by constructing the levels on different axes, which deviate significantly from floor to floor and are unified by the Lightfall. This decision enabled us to combine two seemingly irreconcilable paradigms of the contemporary art museum: the museum of neutral white boxes, which provides optimal, flexible space for the exhibition of art, and the museum of spectacle, which moves visitors and offers a remarkable social experience. In this way, the Amir Building’s synthesis of radical and conventional geometries produces a new type of museum experience, one that is as rooted in the Baroque as it is in the Modern.”

For the inauguration of the new 9,000-square-foot temporary exhibitions gallery in the Amir Building, the Museum will present Kiefer in Tel Aviv, a site-specific exhibition organized by Mordechai Omer in collaboration with the artist. Large-scale works by Kiefer inspired by themes of the Hebrew Bible, Jewish myths and mysticism and German-Jewish history will surround two of the artist’s monumental enclosures: East-West, housing 44 huge metal plates imprinted with images of paintings and objects, and a specially conceived version of The Library, whose multiple pewter and lead “books” are a record of diagrams and photographs.
.
.
.
.
.
.
.
source: dezeen

Dezeen in Israel: here are some images of the recently opened new wing at the Tel Aviv Museum of Art, which has a dramatically faceted atrium piercing its centre.

Designed by American architect Preston Scott Cohen, the Herta and Paul Amir Building has a spiralling plan with two storeys above ground and three underground floors.

Galleries overlook the 26-metre-high atrium through long windows that slice through its angled walls.

Although the building has a triangular plan, these exhibition galleries are rectangular and display art, design, architecture and photography.

Walls fold around the entrances to these rooms and appear on approach to be wafer-thin.

The museum has a tessellated concrete exterior where windows match the shapes of the triangular and rectangular panels.

You can see more stories about Israeli architecture and interiors here, or if you’re interested in furniture and product design from Israel you can check out our special feature here.

Photography is by Amit Geron.

Here’s some more information from the museum:

The design for the Amir Building arises directly from the challenge of providing several floors of large, neutral, rectangular galleries within a tight, idiosyncratic, triangular site. The solution is to “square the triangle” by constructing the levels on different axes, which deviate significantly from floor to floor. In essence, the building’s levels—two above grade and three below—are structurally independent plans stacked one on top of the other.

These levels are unified by the “Lightfall”: an 87-foot-high, spiraling, top-lit atrium, whose form is defined by subtly twisting surfaces that curve and veer up and down through the building. The complex geometry of the Lightfall’s surfaces (hyperbolic parabolas) connect the disparate angles of the galleries; the stairs and ramped promenades along them serve as the surprising, continually unfolding vertical circulation system; while the natural light from above is refracted into the deepest recesses of the half-buried building. Cantilevers accommodate the discrepancies between plans and provide overhangs at the perimeter.

In this way, the Amir Building combines two seemingly irreconcilable paradigms of the contemporary art museum: the museum of neutral white boxes, which provides optimal, flexible space for the exhibition of art, and the museum of spectacle, which moves visitors and offers a remarkable social experience. The Amir Building’s synthesis of radical and conventional geometries produces a new type of museum experience, one that is as rooted in the baroque as it is in the Modern.

Conceptually, the Amir Building is related to the Museum’s Brutalist main building (completed 1971; Dan Eytan and Yitzchak Yashar, architects). At the same time, it also relates to the larger tradition of Modern architecture in Tel Aviv, as seen in the multiple vocabularies of Mendelsohn, the Bauhaus and the White City. The gleaming white parabolas of the façade are composed of 465 differently shaped flat panels made of pre-cast reinforced concrete. Achieving a combination of form and material that is unprecedented in the city, the façade translates Tel Aviv’s existing Modernism into a contemporary and progressive architectural language.
.
.
.
.
.
.
.
source: pscohen

Preston Scott Cohen is the Chair of the Department of Architecture and the Gerald M. McCue Professor of Architecture at Harvard University Graduate School of Design. He is the author of Contested Symmetries (Princeton Architectural Press, 2001) and numerous theoretical and historical essays on architecture. His work has been widely published and exhibited and is in numerous collections including The Museum of Modern Art, New York, The Cooper-Hewitt National Design Museum, San Francisco Museum of Modern Art, Museum of Contemporary Art, Los Angeles and the Fogg Museum of Art, Harvard. He lectures regularly in prestigious venues around the world. Cohen’s work has been the subject of numerous theoretical assessments by renowned critics and historians including Sylvia Lavin, Antoine Picon, Michael Hays, Nikolaus Kuhnert, Terry Riley, Robert Somol, Hashim Sarkis and Rafael Moneo. He was the Frank Gehry International Chair at the University of Toronto (2004) and the Perloff Professor at UCLA (2002). He has held faculty positions at Princeton, RISD, and Ohio State University.

Nemlich is a licensed Israeli architect and received his professional education from Technion University in Tel Aviv. Currently, he is the Project Architect for the Tel Aviv Museum of Art, the Taiyuan Museum of Art and the Datong Library. He has developed remarkable techniques for working within the difficult geometric forms of these projects, integrating structural and mechanical systems by combining traditional and computational means. Prior to joining PSC Inc in 2005, he was at Ada Karmi and Partners where, from 1998 to 2004, he served as the Project Architect for the Rothchild Open University in Ra�anana (43,000 m2, 70M$).

Quintal is a licensed architect in the United States and Canada. He specializes in real estate development projects, project management and construction administration. He received a BArch from Universite de Montreal, and a Master Degree in Real Estate Development from the Massachusetts Institute of Technology. At PSC, Inc. Quintal is involved in contract negotiations, program writing, project delivery, zoning and code analysis, community consultations, planning review and permitting.