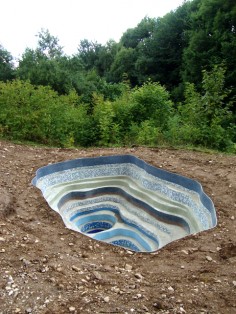 Rachael Champion (b. 1982, New York, USA) graduated with a Postgraduate Diploma in Fine Art from the Royal Academy Schools in 2010. Champion has been awarded the Arts Foundation Award for sculpture (2013) and the Red Mansion Art Prize (2010). In 2012 she was the Camden Arts Centre ‘Artist in Residence’. In 2015 Champion will install a permanent installation on Sarvisalo, The Zabludowicz Collection’s outpost in Finland. Champion lives and works in London.

Rachael Champion’s site-specific sculptures and installations are engaged in a discourse surrounding the dependant yet unclear relationship between industry, technology and nature. Her works consist of large scale constructions and dramatic architectural interventions that question the shifting interactions humanity has with the natural world and considers their boundaries, separations and progressive implications. Through manipulating information from diverse influences that include brutalist architecture, agriculture, raw materials, municipal infrastructure, public space and ecology, Champion questions the layered and dynamic complexities of our shifting physical environment.

Contrasting industrial materials with ecological matter (such as plants, grasses and algae) Champion explores our interrelated expectations of the two. Carefully orchestrated arrangements of both synthetic and organic objects create environments that resonate a sense of imminent ‘otherness’. It is in this way Champion speaks of future bi-products formed from a merging of the artificial and biological. The products generated from this homogenising of material: artificial light, constructed ‘natural’ space (allotments, quarry lakes, urban parks), genetically modified and grown materials, see ecological matter absorbed into an indeterminate, dystopian system.

Champion is drawn to materials commonly found on major construction sites and development projects. These industrial products (often hidden in the landscape or considered objects to assimilate into natural environments) are deliberately focused in upon amongst the basic but essential examples of plant life, and presented out of context so to juxtapose their alien sculptural qualities with an inherent functionality. The living matter sometimes included in the work (which often has to be maintained throughout the installations life) not only emphasises the temporal nature of these fabricated environments but also encourages the spontaneous evolution of the piece.