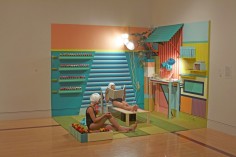 Work: I have scrutinized domestic spaces for as long as I can remember. This innate ability to analyze allows me to quickly observe and interpret signifiers in a household setting. I am drawn to subverting vignettes that appear in the American home by framing spaces and objects in unusual ways. There is a tension that emerges between what we think we know and what looking deeper might reveal. My work purposefully plays with two and three-dimensional realms, creating a push/pull in perceptions. I use vibrant colors to create directional line patterns that suggest dimensional space and I flatten objects with matte paints. By commanding color and space, decorative objects are revealed as cultural signifiers. The inert becomes active. This creates a process of apperception: when the atmosphere is familiar and unfamiliar at the same time. Cacti-Smash is a performance with two female characters who dwell within a set. Two women are sunbathing, when they are disrupted by the signal to work. They automatically engage in their task of dismembering a live cactus. Their work in finalized in a test tube that is carefully placed next to fake cacti replicas. The women return to leisure when their task is complete. Cacti-Smash highlights contemporary observations of perception, domesticity, identity and American culture. I see the barrage of information present in today’s culture accumulating into an increasingly “meta” interpretation of the world around us. How is our fluid understanding of reality reflected in the ordinary parts of life, such as houseplants and knick-knacks? I use my own cultural conditioning to guide decisions in the making process. I value this process, as it is important to the understanding of self. The viewers may use the experience of the work to consider their own psychological and cultural relationship to space and objects.
Photographer: Justin Plakas
.
.
.
.
.
.
.
source: dailyserving

Rachel Debuque works with myriad subjects and forms. In her work, installation, performance, video, and sculpture collide with themes of domesticity, the still life, and the eccentricities of both individual personalities and physical spaces. Through all of this, her oeuvre coheres around a central concern: the visual re-codification and conveyance of memory through spatial sensitivity.

Debuque’s Cacti-Smash (2013) is an installation-based performance that features two swimsuit models, nearly identically dressed, as well as a series of small, color-coordinated cacti and logs. Two colorful and brightly patterned walls and a matching floor frame a space that reads simultaneously as an interior and exterior room. As the two models begin their performance, a looped vocal track plays and then fades out, and the two women don laboratory-style safety goggles and classic yellow rubber gloves. The performance continues as the two cut, smash, and place a cactus in a test tube—this process, repeated with each performance, enacts an alternative yet nonsensical type of housework. With its candy-striped colors, combination of faux and real objects, and deliberately confident choreography, Cacti-Smash reads as a scene borrowed from some music video or commercial studio set, combining incredibly bright colors in attention-grabbing graphic patterns.

Where Cacti-Smash reverberates with an upbeat visual tempo, another room-sized installation, Fancy Room (2013), issues a deeply melancholic air, like a room from a child’s imagination lost in time and space, faintly remembered only now. With a bright white light as the focal point and a reduced palette, Fancy Room is reminiscent of Olafur Eliasson’s The Weather Project (2003) in the Tate Modern’s Turbine Hall.

As the artist delves into her subject matter, certain materials and themes reappear: a lintel fireplace, turquoise strips of peeling wall paint, and faux logs. Blue Fireplace (2012) is what Debuque calls an “investigation—small iterations or sketches for the larger work.” However, these trial runs do more than simply allow her to analyze materials and palette; they create robustly layered memories for her and, in turn, the viewer. They act as sculptural simulacra—repeated patterns, colors, and objects reinforce her presentation of re-codified memory, and are crafted with all the attention to detail one would expect of a finished artwork. Rachel Debuque’s work engages memory, but with an often discomforting internal logic owing to its unfamiliarity and seeming nonsensical rules. While the internal motivations behind her works take engagement with and openness to alternative methods of thinking about space and the memory of space, what remains consistent is her dedication to exploring installation through many angles and incorporating digital theatricality at every turn.
Rachel Debuque is an American artist living and working in New Mexico. She received her MFA degree from the University of Georgia and holds a BFA from the Indiana University of Pennsylvania. She is currently an instructor in the BFA program at the University of New Mexico Highlands and previously taught at the Lamarr Dodd School of Art at the University of Georgia. Her work has been shown in group and solo exhibitions in Zagreb, Croatia; Pittsburgh, PA; Taipei, Taiwan; Athens, GA; and Brooklyn, NY.