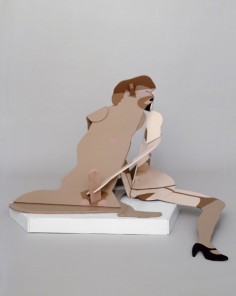 Rachel Feinstein was born in 1971 in Defiance, Arizona. She studied at Columbia University and Skowhegan School of Painting and Sculpture. Her work has been the subject of numerous solo and group exhibitions, including “The Alliance,” Hyundai Gallery, Beijing, China (2008, traveled to Hyundai Gallery, Korea); “Something About Mary,” Metropolitan Opera House, New York (2009); “Rachel Feinstein: The Snow Queen,” Lever House, New York (2011); and “The Little Black Dress,” SCAD Museum of Art, Savannah, Georgia (2012). Feinstein lives and works in New York.
.
.
.
.
.
.
.
source: apaporkr

Rachel Feinstein’s isolated arabesques of plywood seemed marooned in the cavernous gallery space. With little conversation between them, they maintained a sulky autonomy that was rather a shame, considering their individual articulacy. Mother and Children (2007) is a song of varnished wood with monkey-like riffs and a chorus of curves, while Deposition (2007) is a more sombre, nearly monochromatic, ode to innards, with a pancreatic scalloped bit and an escaping tract of ooze. Although describing these works becomes an exercise in analogy, calling for a raft of phenomenological equivalences, there is no unifying analogy to draw them together beyond the immediately sculptural one: their classical arrangement asks us to consider each of them as an autonomous element.

The sculptures’ faceted construction and simple colour schemes reduce them to a visual rather than tactile proposition, more like drawings or cartoons that have complicated themselves into three dimensions. At times Feinstein limits the amount of pictorial information – the humanizing work of Mother and Children, for instance, is performed almost entirely by representations of ears and arms – but elsewhere she is more explicit. Humpers (2006) leaves little interpreting work for us to do: stockings, high heels, beard, nipples and pubis are crudely painted in, and the woman’s pale arm slots at the hand around a picket-fence post of a cock. The chocks of wood that hold together the sheets of plywood are left pragmatically visible, giving us the impression that the man’s penis and ear are vital to the couple’s position. These pleasing structural–pictorial coincidences become the pivots of the work, like moments of theatrical ingenuity, when representation is achieved through unexpected means. The Eve figure in Adam and Eve (2007) creates just such a hotspot where her arm, holding an apple aloft, penetrates a hole in the canopy of the tree – a pastoral equivalent of the cinematic steam train entering the proverbial tunnel, perhaps.

The multiple viewpoint of each piece, and the many images that they create, depending on which angle you approach them from, demands a sort of cinematic mode of looking. Walking around them releases moments of sense, like Hans Holbein’s anamorphic device in The Ambassadors (1533), while contemplating them from a single, stationary vantage point recalls the simultaneity of Cubism. The relationship between painting and sculpture in Feinstein’s work has been explicit for some time, and here the point at which they meet takes on the attributes of a pop-up greetings card: a declarative and decorative low-fi classicism. And then again, with some pieces done up in thick domestic gloss colour and others varnished to show off the wood grain, we might think of them as ornate and rather impractical room dividers.

Although the work references many pivotal points in art history, we are reminded that such historical radicalism is no longer an option. Feinstein’s litany of styles and quotations becomes a horizontal process of garnering as she fuses Renaissance and Neo-Classical references with a Modernist multiplicity and embeds within them singular identifiable motifs: an echo of the flowing hair of Botticelli’s The Birth of Venus (c. 1485–6), Tom Wesselmann’s soft-porn Pop, the irrepressible uprightness of David Smith – take your pick from the grab bag of history. It is as though Feinstein is attempting to articulate a position for sculpture now, in the way that painters have for some decades, reaching innumerable end-games that have been surmounted by new gambits or a reappraisal of vocabulary, both in practice and in commentary. But while this fluctuation between painterly and sculptural concerns is interesting, it is probably loading the work with far too grand an ambition, crediting Feinstein with more of a revisionist intention than is actually the case. It is more likely that she is involved in a practice of visual indulgence and historical irreverence. The obvious pleasure she takes in camped-up appropriation, and refinement of surface and form implies a viewpoint that is turned inwards to the work, not outwards towards historical context.Sally O’Reilly