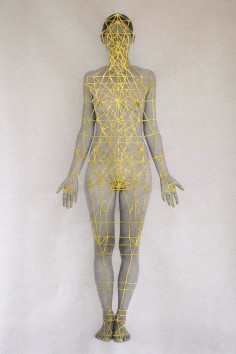 British-born artist Rachel Garrard creates a range of multi-disciplinary work that explores the great unknown, looking to quantum physics and other theories of the universe for inspiration and guidance. Both her video performance pieces and works on paper capture, despite their earthly limitations, the infinite nature of life on this planet and beyond. In a personal statement on her blog, the artist explains “that exploring the outer reaches of the universe can be similar to exploring the inner reaches of the human psyche and that both are governed by the same forces.”

Her recent series, Vessel, takes this concept and literally applies it to the individual. In the video performance Perpetual Return, Garrard maps the natural geometry of the body on her skin, using the same beautifully simple patterns that repeat in nature. As the lines begin to overlap and blend into each other, Garrard becomes less and less visible, melting into the eternity in which all beings participate. The accompanying works on paper, Silhouettes, serve as “blue prints” of the greater, incredibly expansive existence that extend from each body; the delicate lines communicate the web of energy in which the universe is suspended. Lines build up and break down, knowledge is gained and compounded, and the body transcends itself.
.
.
.
.
.
.
.
source: kristinhjellegjerde

Born in 1984 and dividing her time between New York and London, Rachel Garrard received a BA Honors in Fashion Design from the Central Saint Martins College of Arts and Design, where she also studied metal work. Two years later, she received her Postgraduate Diploma in Fine Art from the Byamshaw School of Art under a full scholarship, followed by workshops in the art of soldering at NYC Resistors the same year. Having exhibited in New York, St Petersburg and London, she is the recipient of the Performance Art Award at the first-ever holographic projection art awards hosted by Musion in 2009.