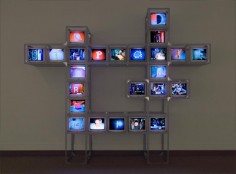 Project conceived and developed during a residency at the Canada Council Paris Studio (Jan – April ’09) and shot during a residency at the Elsewhere Museum in Greensboro North Carolina (Aug ’09). The project has been conceived as a creative response to the work and ideas of French writer George Perec, best known for his epic novel ‘Life A Users Manual’, a work that maps a conceptual narrative around intersecting lives within a Parisian apartment building. A member of the OULIPO group of writers and mathematicians, Perec adhered to the group’s philosophy of constrained writing techniques and developed ‘Life A Users Manual’ through a complex system of narrative generation and play. In addition to writing novels, essays, radio plays and film scripts, Georges Perec was also a crossword-setter and Life Across Words takes on this form as its physical structure, with each of the 24 monitors representing a letter within a crossword of five intersecting names/characters: Stephanie, George, Danna, Eliza and Dan. The Elsewhere Museum in Greensboro, North Carolina is a ‘living museum’, artists collective and residency centre based within a large, three-story former thrift store. Artists come to the museum for residencies of one month to work with the collection and create new site specific/responsive works from objects in the collection and/or spaces within the building. An old, eccentric building with multiple levels within levels (towers, mezzanines, platforms, fire escapes), Elsewhere is a museum based on a ethos of ‘play’ as a serious strategy for human interaction, learning and engagement with the material world. Elsewhere also maintains a ‘reading list’ of texts relevant to the mandate of the collective and George Perec is on their list. Elsewhere was founded in 2003 by the current Co-Directors Stephanie Sherman and George Scheer who both appear as participants in the video project, have both studied the writings of Georges Perec and have both agreed to contribute essays to the proposed exhibition catalogue. The other project collaborators are Danna Rooth and Dan White, both currently members of staff at Elsewhere, and Eliza Fernand, a fellow Artist in Residence. Life Across Words is comprised of 24, 13” television monitors arranged in the form of a crossword. Each of the 5 words in the crossword is the name of one of the collaborators. The ‘text’ is formed by letters found within the Elsewhere museum, using objects and materials, architecture and signage. Each project participant ‘moves’ through the monitors that spell out the letters in their name, meeting up with fellow participants at the intersection points in the crossword. The use of careful shooting and editing in addition to the use of video synchronization technologies to maintain frame-accuracy between the media on each television, allows for complete control over the timing of all the actions. When a participant moves from one monitor to the next, the ‘live action’ is replaced with static images of the letter of the alphabet that the monitor represents.
.
.
.
.
.
.
.
source: random-magazinenet

Life Across Words, by Rachelle Viader Knowles, is a 24-channel synchronized video installation. A creative response to Georges Perec’s novel Life A Users Manual, an experimental, conceptual game of a book, where the narrative travels from room to room within a fictional Parisian apartment building. Life Across Words consists of 24 tv’s in the form of a crossword puzzle with 5 intersecting words, each the name of a project participant, who moves through the tv’s that spell out their name, performing an action for each letter. Where words cross, the participants perform an action together. Shot at the Elsewhere Museum in North Carolina, a ‘living museum’ and art centre based on a ethos of ‘play’ as a serious strategy for human interaction, learning and engagement with the material world.
The back end consists of 8 networked computers running quicktime and MaxMSP. Video delivery and synchronization system designed by David Ogborn. Constructed into a looped 30 minute cycle, each cycle begins and ends with images of books on shelves and the whole piece begins and ends as a library.
The exhibition was accompanied by a catalogue with essays by Dr Carmen Robertson and Stephanie Sherman. Project participants: Danna Rooth, Stephanie Sherman, Eliza Fernand, George Scheer and Dan White.
.
.
.
.
.
.
.
source: sknacca
Rachelle Viader Knowles was born in 1969 in Bristol, United Kingdom, and grew up in Cardiff, Wales. She also made regular trips to her mother’s native country, Mauritius. She received a foundation certificate in Art and Design from Cardiff Art College in 1988 before going on to study interactive arts at the University of Wales, completing her Bachelor of Fine Arts in 1993. Viader Knowles then moved to Windsor, Ontario to study multimedia at the University of Windsor, where she received her Master of Fine Arts in 1996. In 2007, Viader Knowles moved to Regina, Saskatchewan to teach at the University of Regina.

Viader Knowles’ installation and video pieces combine performance and text with a variety of materials including found objects. Her work has been exhibited across Canada and in the United States, the United Kingdom, South Korea, and Argentina. Her work is in the collection of the MacKenzie Art Gallery (Regina) as well as private collections.

Viader Knowles returns to visit Cardiff as frequently as she is able and has traveled to other places around the world through artist residencies, including those at the Braziers International Artists’ Workshop (Oxfordshire, UK, 1999), the Atlantic Centre for the Arts (Florida, USA, 2005), the Hungarian Multicultural Centre (Budapest, Hungary, 2006-2007), Residencia Corazon (La Plata, Argentina, 2008), and the Canada Council Paris Studio (2009).

Rachelle Viader Knowles continues to live in Regina and to teach at the University of Regina, where she is Head of the Visual Arts Department.