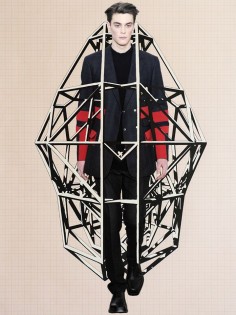 Peter Jellitsch (born 1982) operates at the intersection of science and art. His research-based practice develops in a complex process, in virtual and analogue worlds. His main concern is the visualisation of what is in fact invisible, of virtual phenomena and structures existing in everyday life yet imperceptible to the human eye. Peter Jellitsch is an exponent of a young generation whose perception of reality has undergone a radical change, due to new technology, and who quite naturally spread out their fields of work and ideas in new dimensions.
.
.
.
.
.
.
.
source: voguecouk

RAF SIMONS was born in Belgium in 1968 and, aside from his sub-culturally-inspired and independent aesthetic, is a designer best-known for his dramatic career change – from the world of industrial and furniture design to the world of menswear. Simons launched his label in 1995 and, ten years later, in 2005 was appointed creative director of Jil Sander – a role in which he flourished, even though it was one he had to take on without having met the label’s eponymous founder first.
.
.
.
.
.
.
source: epocanegocios