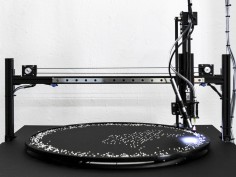 source: creativeapplicationsnet
Created by Berlin based Ralf Baecker, Random Access Memory is a fully functional digital memory. Instead of operating on semi-conducting components to represent either the binary states of 0 (zero) or 1 (one), the memory uses grains of sand as storage material. In addition, the machine performs a computational process on this memory.

Random Access Memory reflects on the interaction of idea and matter and their encounter in contemporary information technology. The use of sand as a medium refers to an old divination technique, called geomancy, originated from the arabic ‛ilm al-raml which translates as “science of the sand” and defines a set of rules, to recursively manipulate

The software is realised in Processing. It is using a microscope camera to track a stone in order to align the pick and place mechanism exactly above the grain. The hardware uses a teensy board to control the ventile and the three stepper motors for each axis. It is a polar coordinate system. There is no X or Y axis but radius and angle. Another Z-axis move the pick and place head up and down.