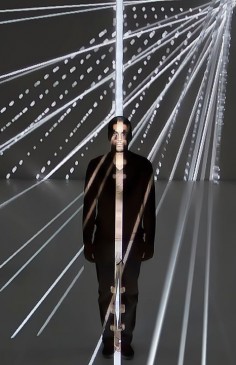 Bright beams cut the room, replacing complete darkness. They glow in threatening white as they reach to the ceiling in mathematical precision. Two men step into the room as scan matrices sense their bodies. They become sliced into their components, rearranged and manipulated by light till the moment they decide to break the dictatorship of machine and find nothing left – but themselves.

The piece “POW 2045″ ranges over different fields of art, science and design. In order to cover those areas and weave them into each other – the artists decided to split the production development into three parts over a period of 8 month, each of them produced in its own environment:
The Dance (Choreographic Coding Lab by William Forsythe)
The Architectural Design and Technology (Bauhaus Dessau)
The Choreography
Within the next chapter we are going to explain a little more detailed our approach to choreography and production.

To develop a duet of man and machine Christian Mio Loclair (in collaboration with the Berlin design studio “onformative”) and Raphael Hillebrand started to investigate different methods of computer generated choreography. The main question was “How can a machine become a partner within an artistic process instead of an effect that serves the artist? How can the machine generate choreographic patterns, creative solutions and become an equal partner within artistic productions?”
The outcome was a visual language called “Pathfinder”. This Application represents a generative approach to structured improvisation which allows man and machine to improvise together, continuously searching for new shapes and transitions. The corresponding findings describe the foundation for the physical language and dance in “Pow 2045”.

After one month of intense prototyping, the results were presented at choreographic coding. The choreographic coding lab (by William Forsythe and Node Forum for digital arts) is a laboratory for interdisciplinary art melting technology and dance. It was the perfect starting point to develop and share a tight relationship between human bodies and digital procedures.

Invited at the world-famous “Bauhaus Dessau” over a period of 3 weeks, the artists became inspired by great fore thinkers of Design, Graphic and Architecture such as Kandinsky and Gropius. Especially the “Stäbetanz” and many different drawings by the architect Oskar Schlemmer were a huge inspiration to “Pow 2045″.
The major contribution of the drawing by Oskar Schlemmer is the clean separation between shapes. The mathematical construct covers the human body, yet sets a contrast to organic shapes in its accuracy and mechanical precision. This kind of visual contrast can be understood as a visual representation of human computer difference and reveals core features of both – man and machine. A characteristic foundation to design the dialogue of “POW 2045″

However the Bauhaus Dessau also inspired the dance of “POW 2045″. Schlemmers studies of architecture also covered choreography and revealed a close relationship to rigid forms in urban dances such as Popping. In order to create an open experience of improvisation and spontaneous moments the artists decided to not use classical projection mapping technologies or video art to bring the installation to live. Instead the projector patterns that light up the stage and installation are driven by a computer algorithm. This program is able to read the dancers behavior by the use of 3d camera technology and translate the captured information into graphics and sound. Hence “POW 2045” consists of a tight communication between the dancers and the overwhelming installation in order to create a democratic artistic moment between man and machine.

As the finale step of the production, Hillebrand decided to devote his master thesis of choreography to “POW 2045″ and to its preceding investigations. The main challenge was to create a choreographic concept to cover the topic but reduce complex questions to personal interests.
“So how do we feel now? How do we feel when everything around us becomes artificial? How do we see ourselves and proximity when we are cut in slices?”

During a period of 6 weeks the artists continued to develop their physical language, representing their conceptual and poetic view on themselves, on each other and on the omnipresent machine. The resulting choreographic elements create a fusion of dance-theater, spoken words and urban dances such as Bboying and Popping reaching from organic flow and tragedy to robotic precision.
In order to reflect the dialog between man and machine, the accompanying musical pieces build a bidirectional relationship to dance. Some musical elements dictate the choreography. Music by Murcof or Colin Stetson for example are used to polarize between digital and organic methods of creation.

Other musical pieces are dictated by the choreography. In collaboration with the experimental sound artist Johannes Hellberger (“KLING KLANG KLONG”) , Hillebrand and Loclair used a custom software and 3d Cameras to capture their movements and translate them into sound. The Choreographic Production of “POW 2045” define the final phase of the project and sum up the concepts, emotions and the path taken by Hillebrand and Loclair.

Pow2045 is a dance piece combining generative design and urban choreography. It has been premiered at the world famous Bauhaus Dessau and was touring across central america.
In order to develope a stage filling installation for a cultural environment – our main design target covers a lot of economic features. We knew that a touring performance has to fulfill the following productional and artistic needs:
Rapid prototyping of flexible software
In this case the dancer Christian Mio Loclair had to take over choreographic responsility and design|engineer the installation at the same time. In order to close the gap between on stage physical rehearsal and quick design iterations, the team decided to use vvvv for this production. VVVV is a visual programming language and in our opinion the best software for rapid prototyping of visual content.
vvvv offers high quality shader support (DX11), easy interactionfor realtime adjustments and multi render modules for monitoring the state of the program.

“For me it was the first time to dance on a stage, which is projected by content i coded. It is a different kind of double pressure. You see your pixels flying by, you literally feel the heat of the gpu and smell upcoming problems in code – while dancing. Hence it is necessary to create a monitor and control environment, which can be controlled and even recovered by an external light technician. VVVV is perfect for this scenario and definitly our way to go for future productions.” Christian Mio Loclair

Equipment
Luggage and Equipment dramatically increases touring costs and stress. With short installation times and exotic airlines the possibility of a blackout is given. Hence it was necessary to come up with a type of installation that is very small in luggage and huge on stage. For Pow2045 we used 6- 10 cm gauze bandage which is taut from bottom to ground and fixed with tape. The resulting installation is maximal 12m x 6m x 6m, fits in every pocket and costs about 20 Euro per installation. A drawback of gauze is definitly its extensibility over time. Furthermore the tension on the gauze is very high beeing taped from the dance carpet to light truss. Air humidity definitly affects the strength of the tape and needs to be considered.

Build up max one day
Another economic factor is the build up time. Renting the theatre can be very expensive and in order to create the highest possible availability, we needed to come up with a lightweigth calibration that can be installed, taped and performed on the same day. Hence we created an installation with not more then 9 mapped lines of gauze in space. We designed the curve of the mapped lines to melt into the backdrop of the stage. This curve then was visually continued along the backdrop which left the impression of more then 15 mapped lines.This dramatically decreased our installation time and secured our availability to different touring spots

One projector
Many theatres which suffer from less cultural and economic support dont have access to high end projectors. It was mandatory to create a three dimensional playground with just one projector.For this purpose we mapped floor, backdrop and lines with different content all in one field of view.

Of Dance and Technology
Throughout the production we experimented with different kind of technologies ranging from interactive graphics to interactive sound. We did so in order to communicate a tight relationship between the dancers on stage and the artificial environment of generative light. However interaction methods are already so far advanced, that people had a hard time distinguishing between a dancer moving to sound or a dancer creating the sound with his body. Our first solution was to create intended flaws in the sound and interaction in order to leave an impression of fragility. However we decided to stop doing so, since this strategic decision to communicate technology – pushed us further away from poetic decisions to communicate artistic purposes. Hence we decided to reduce interactive components which do not contribute to the artistic overall intention. Hence we aimed to focus on physical sensations; humans and how they live and feel within digital environments, rather then communicating engineering qualities.
.
.
.
.
.
.
.
source: princemionet

Dance and interactive media combine to new ways of perceiving and communication.

The blending of dancing bodies and cutting-edge technology illustrate our present age in an artistic way. It enriches the way we perceive our identity, technology and how we communicate new ideas.

As professional dancers and media artists since over a decade, we love to perform the duett of man and machine…

WALTZ BINAIRE is a fusion of international choreographers, directors and media artists. We merge human bodies and computer technology to develop new artistic dance experiences. We are dedicated, comitted and experienced to develop unique interdisziplinary performances and provide our clients with professional advice.

The clash of man and machine is the most characteristic sensation of our era. The closer man and machine interact, the more we are able to recognize the benefits of machines and explore who we are as humans. Our projects illustrate sensual duetts between man and machine in an artistic way. The resulting portray intends to crystallize out the countless possibilities of technology and the asthetics of human identity.

WALTZ BINAIRE is a studio focused on merging performance and new interactive media. It is founded by Christian Mio Loclair.
.
.
.
.
.
.
.
source: creativeapplicationsnet

Created by Berlin based dance media artist Christian Mio Loclair under his new studio Waltz Binaire, Pow2045 is a dance performance that combines generative design with urban choreography, focusing on a personal perspective towards duetts of man and machine.

The project has been premiered at the world famous Bauhaus Dessau and was touring across central america earlier this year. To meet production needs of a touring performance, the team chose VVVV as the programming language that enabled rapid prototyping of visual content, customised to each space where the performance was shown.

For me it was the first time to dance on a stage, which is projected by content i coded. It is a different kind of double pressure. You see your pixels flying by, you literally feel the heat of the gpu and smell upcoming problems in code – while dancing. Hence it is necessary to create a monitor and control environment, which can be controlled and even recovered by an external light technician. VVVV is perfect for this scenario and definitly our way to go for future productions. – Christian Mio Loclair

For Pow2045 the team used 6- 10 cm gauze bandage which is taut from bottom to ground and fixed with tape. The resulting installation is maximal 12m x 6m x 6m, fits in every pocket and costs about 20 Euro per installation. Another economic factor is the build up time, hence the team created an installation with not more then 9 mapped lines of gauze in space. They designed the curve of the mapped lines to melt into the backdrop of the stage and since it was mandatory to create a three dimensional playground with just one projector, the team mapped floor, backdrop and lines with different content all in one field of view.
.
.
.
.
.
.
.
source: elnorte