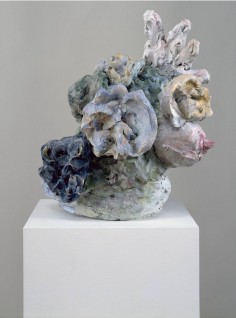 source: matthewmarks
Rebecca Warren first exhibited her works at Matthew Marks Gallery in 2005. In her use of painted bronze, raw clay and welded steel the negotiation between thought and process is always evident. When approaching the female body, for instance, Warren indulges its history of sexual guises – from ancient fertility goddess to misogynistic cartoon character – with pliable materials that evidence her hand.

She works with an eye to extremes – monstrous excess, alarming paucity – creating a variety of objects that exist somewhere on the continuum between pure fleshiness and pure cartoonishness. Warren’s heightened appreciation of the framing, placement and context of her works, combined with an exploration of materials’ hidden meanings can also be found in her wall-mounted vitrines. In these works small objects are placed above and outside the containers. The arrangement appears to be provisional – and this apparently unfinished state of much of Rebecca Warren’s work, the deceptive crudity, is analogous to its underlying conceptual and thematic slipperiness.

Warren (born 1965) was nominated for the Turner Prize in 2006 and the Vincent Award in 2008. In 2013 a solo exhibition of her work was held at the Kunstverein Munich and at the Serpentine Gallery, London, in 2009. Her work was included in the 54th Venice Biennale, and has been shown at the The Art Institute of Chicago, Chicago; Royal Academy of Arts, London; Barbican Art Gallery, London; Palais de Tokyo, Paris; the New Museum, New York, and Tate Britain, London.
.
.
.
.
.
.
.
source: saatchigallery
Ranging from the amorphous to more clearly recognisable forms, Rebecca Warren’s sculptures create a bold new figure for the female nude. Her subject is one of the most traditional in art history, but she subverts the inherited cliches associated with the genre, redefining what sculpture should be or should look like. With their earthy, unfired and unfinished look, they unveil a tension between thought and process, while creating a unique, new sculptural mode.