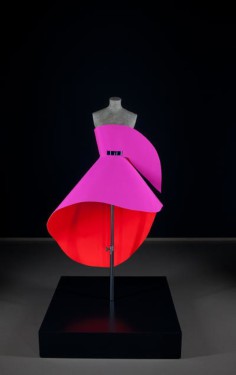 Rejina Pyo is an award winning Korean born fashion designer based in London. Having completed her Central St. Martin’s MA in 2011, Rejina went on to win the prestigious Han Nefkens Fashion award, before establishing her internationally stocked eponymous label in 2013. Rejina Pyo is known for its astute cutting, exploration of geometric shapes and fusing relaxed proportions with fresh and quirky colour combinations, evoking a paired back confidence.

In 2014 she showed her sculptural pieces in the ‘Future of Fashion is Now’ exhibition alongside Hussein Chalayan, Victor&Rolf and Iris Van Herpen at the Museum Boijmans in the Netherlands. Previously, her sculptural works were also a part of the ‘Monsters in Fashion’ exhibition, which was in Athens in 2012 before moving to Paris’s Gallery La Gaite Lyryque in early 2013. Rejina’s work was also exhibited alongside Alexander McQueen and Martin Margiela at the ‘A Queen Within’ exhibition, curated by Sofia Hedman.

Rejina Pyo and her designs have been featured in Vogue, Elle, Independent, New York Times, AnOther, The Gentlewoman, Dazed and Confused, and Style.com, amongst others. ​Pyo is also a tutor at Central Saint Martins and acts as a consultant womenswear designer for other fashion houses in Europe.
.
.
.
.
.
.
.
source: avenue32

Rejina Pyo is an award winning Korean-born fashion designer based in London. She completed her MA degree at Central Saint Martins in 2011, where she created a standout collection for her London Fashion Week show. Pyo’s use of wooden sculptures, together with fluid dresses, created a beautifully idiosyncratic mood that captured the attention of the fashion press. Following her show Rejina was chosen by the H&M owned retail store Weekday to create a range of designs based on her MA collection that were subsequently sold in over 30 of their stores across Europe.

Rejina has gained significant experience working for the past 2 years for various luxury designers in London. During this time she was also won the prestigious Han Nefkens Fashion Award (judged by Penny Martin – Chief Editor at Gentlewoman, Viktor & Rolf, Han Nefkens and Jose Teunissen). As part of this award Rejina was commissioned to create an installation for the Museum Boijmans Van Beuningen in Rotterdam. Entitled ‘Structural Mode’ this statement collection worked on the boundary between wearable garments and art works, fusing together elements of fashion and sculpture. Her work has featured in Vogue, Elle, Independent, New York Times, AnOther, The Gentlewoman, Dazed and Confused, and Style.com to name a few.