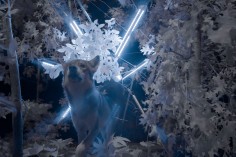 Work: The woods, wild and mysterious from afar, appear as a stage on which every element is considered. Artificially sustained plants are hanging from the trees, embedded in the ecology yet detached from it. Their scaffolding of gleaming metal and infrared lights sway in the wind, waiting.

Grey wolves approach the structures during the night to scratch their body on the steel branches. In an intricate arrangement of devised symbiosis, the contraption takes on the role of host organism. The wolf’s movements generate electricity for the system. Infrared surveillance cameras capture the wolf’s presence, adorned in invisible garlands of electric display, to transmit around the globe for the enjoyment by those whose passion for the spectacle of wilderness sustain its survival.

The work emerged from reflections of wilderness conservation, questioning the relevance and potency of this cultural stance towards the unbuilt environment. In particular by notions of artificiality in relation to what we call nature, and whether the intentionally ‘untouched’ should also be considered modified.

By likening the nature reservation to a set onto which fauna and flora act out a deeply observed routine, the work questions whether conservation is in fact a form of entertainment. The attitudes towards what is still perceived as ‘the wilds’ is of place from which humans are removed, allowing other species to act autonomously. However all acts of preservation – from research biospheres, to conservation projects to recreation parks – are still human-centric; maintaining other species for the benefit of humans. Therefore perhaps a survival strategy for an endangered species should be taking the role of a performer, sustained by its audience.

Within the context of the wilderness as a spectacle, the work references the gentle interspecies dance which forms known animal-plant symbiotic relationships. Rendered through the lens of bioengineering and hyper-nature, plants are reconsidered as facilitators of fabricated forms of symbiosis.

The invisibility of the exchange between the plant and the wolf is reflected by the undetectable display, unseen by the wolf and aimed only at the distant spectator. By using infrared lights the invisible spectacle is only revealed to a physically removed audience, juxtaposing nature documentaries, surveillance technologies and theme park aesthetics.

The work’s title is taken from Maxim Gorky’s disturbed impression of Coney Island, after the park has transformed itself from a nature reserve to a hyper-technological extravaganza, as recounted in Rem Koolhaas’ Delirious New York. Nowhere A Shadow draws parallels between the potential incarnation of ‘nature’ to Coney Island’s rapid evolution from the antidote to the city to a highly aestheticised techno-fantasy.

Entitled And Nowhere a Shadow, the structures were installed by Cohen Van Balen in the woodland district of Future Perfect – an exhibition of a futuristic city on show as part of the Lisbon Architecture Triennale 2013.

“We were inspired by the idea of symbiosis, the relationships between plants and animals, and the beautifully complex systems in nature where an animal and a plant keep each other alive” Revital Cohen told Dezeen. “We wanted to design a plant to keep a wolf alive from extinction.”

The metal structures would feed biologically engineered nutrients to the blueberry plants, while metal prongs at the base would stimulate the wolves’ as they brush past, encouraging them to stop and eat the fruits.

“Wolves in the wild, can only touch each other at one point,” Tuur Van Balen explained. “As a human being, you can grab the wolf at two points. So we added these massagers that touch the animal at two points and the wolves really like it.”

The movement of the wolves would also generate electricity for the devices, powering surveillance cameras that stream footage of the animals across the internet.

“Maybe a way for the animal to keep itself from extinction is to become a form of entertainment,” said Cohen. “If there were cameras in the forest, maybe there would be people willing to watch and pay to watch it.”

Although the technology to embed anti-rabies vaccine in plants is not yet developed, the designers say it could be done with five years of research.

To test the concept, they attached regular blueberry plants to the structures and allowed a wolf to explore the exhibition, capturing the results on film.

“Many Native Americans believe that men and wolves were brothers, but then western culture invented these mythologies of the big bad wolf as symbolising everything’s thats wild and dangerous in nature,” Van Balen told Dezeen.

“But it is only when the wolf has rabies that it becomes the big bad wolf from the stories. It’s the only time when it becomes dangerous to humans and violent,” he added.

The Future Perfect exhibition was curated by architect Liam Young as an exploration into how technology will shape the cities of the future. The show also includes sculptural dresses made by dunking people into wax.

The Lisbon Architecture Triennale continues until 15 December. Follow Dezeen’s coverage of the event »

Here’s a project description from the exhibition organisers:

The Wilds – And Nowhere a Shadow There is no nature anymore. We are wandering a new kind of wilderness, where the line between biology and technology is becoming increasingly indistinguishable. Through genetic modification, engineered meat, cosmetic surgery and geo-engineering we are remaking our world from the scale of cells to the scale of continents.

The woods, wild and mysteri­ous from afar, appear as a stage on which every element is considered. Genetically engineered plants, artificially sustained, are hanging from the trees, embedded in the ecology yet detached from it. Their scaffolding systems of gleaming steel and neon light sway in the wind, waiting.

Grey wolves approach the struc­tures during the night to scratch their body on the steel branches. In an intri­cate arrangement of devised symbio­sis, the contraption takes on the role of host organism. The wolf’s move­ments generate electricity for the system, while the blueberries are engineered to contain rabies vaccine in its fruit to protect the animal from self-destruction. Cameras transmit footage of the wolf’s presence around the globe, adorned in invisible garlands of elec­tric display, to be enjoyed by those whose passion for the spectacle of wilderness sustains its survival.