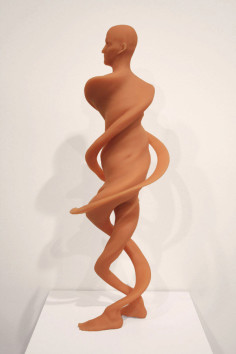 Known for his work in sculpture, drawing, and printmaking, Richard Dupont has made a career out of studying the human figure. Using the body as his subject, Dupont explores the way in which it represents manifestations of power and control, and looks at how the body has been mapped and represented throughout history. In 2001, Dupont began a project in which he scanned and replicated his body in smaller scale, a process that led to several diverse projects, including full-scale nude sculptures, as well as a series of bodiless heads. Interested in the way we scrutinize ourselves, Dupont sees his reproductions of the human figure as a way to highlight the idea of “self-surveillance,” and to note the way in which we map our lives through accumulating details.

Sculptor Richard Dupont explores issues of the human body, self-perception, and identity. Using body scan technology, Dupont creates outsized nude polyurethane figures of himself, manipulating each replica so that the sculptures appear distorted from all but one angle, and otherwise seem flattened, widened, or wavy. “It’s not just retinal, it’s also physiological,” he says. “There’s a queasiness, an anxiety caused by the brain not being able to understand the two things at once.” In the installation, Terminal Stage (2008), nine of Dupont’s works were displayed in a glass room, creating an intentionally discomfiting and voyeuristic viewer experience.
.
.
.
.
.
.
.
source: charestweinberg

Richard Dupont was born in 1968 in New York. He currently lives and works in New York. He has participated in numerous exhibitions in The United States and abroad, most notably solo exhibitions Terminal Stage at The Lever House in 2008 and Between Stations at The Hudson Valley Center For Contemporary Art 2008. His work is in public collections including The Museum of Modern Art, The Whitney Museum of American Art, The Cleveland Museum of Art, and The New York Public Library.