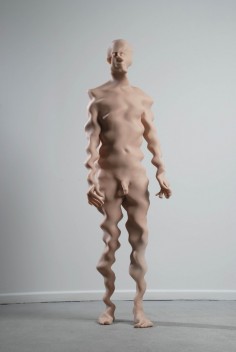 Work: Arts THE NEW YORK TIMES Artists Take Up Digital Tools (excerpt) By HILARIE M. SHEETS Published: October 25, 2013 “PEOPLE have this idea about ‘digital’ that you just press the button and the machine spits something out, which really couldn’t be further from the truth,” said Richard Dupont, a sculptor who makes startling distortions of the human form. Manipulating 3-D scans of his own body on the computer, Mr. Dupont then marries digital fabrication methods like rapid prototyping and computer numerically controlled milling with traditional plaster casting and other laborious hand work to make figures that can appear both archaic and futuristic. One of his standing nudes, similar in posture to the Kouros statues from ancient Greece, appears to melt into ripples when viewed on one axis, suggesting the psychic experience of man in the modern world. “The forms I end up with couldn’t have been done without using digital tools, but you have to disrespect them on some level,” he said. “It’s much more interesting if you can disrupt the expectations of what the technology can do.” His work is on view now in “Out of Hand: Materializing the Postdigital” at the Museum of Arts and Design in New York, an exhibition of works by 85 international artists, architects and designers including Frank Stella, Maya Lin, Daniel Libeskind, Ron Arad and Hiroshi Sugimoto, who are bending digital techniques to their own expressive ends.
THE NEW YORK TIMES “Excursions in a Digitally Fabricated Landscape” (excerpt) By KAREN ROSENBERG Published: October 24, 2013 If you haven’t quite wrapped your head around the concept of 3-D printing, or haven’t yet had a digital scanner wrap itself around you, now you can do both in “Out of Hand: Materializing the Postdigital,” at the Museum of Arts and Design. The technologies in this survey of computer-assisted art, architecture and design may not be entirely new; the Museum of Modern Art’s 2008 exhibition “Design and the Elastic Mind” covered much the same territory and included some of the same artists and projects. But these tools are becoming more pervasive in both art and life, making this a good time for the uninitiated to get up to speed. “Out of Hand,” organized by Ronald T. Labaco, a curator at the museum, is, in any case, an ambitious undertaking for this institution, long associated with analog craftwork. The show looks at art made since 2005 and fills nearly three floors, including many irresistible interactive projects. And while visionary design shows like that of MoMA are entrancing, there’s something to be said for a more down-to-earth, production-focused exhibition. “The digital revolution that spawned the computer age is over,” the introductory text proclaims. “Forms that were once extremely difficult or even impossible to make are now easily realized.” Reinforcing that point is a nude male figure with melty, distorted contours, a sculpture that looks more like a mirage. It’s a self-portrait by the artist Richard Dupont, who had his entire body scanned and ran the data through digital modeling programs. That piece is typical of the works here in that it’s made with computer assistance at almost every stage, from design right through fabrication processes, like digital milling and rapid prototyping. (For a full explanation of these highly technical terms, it’s best to consult the glossary in the catalog.) The goal is a kind of seamless, accelerated transition from idea to material form.

Statement: Richard Dupont (b 1968, New York City) is an American artist. His work includes drawings, installations, sculptures, and prints; and concerns themes of the human body, digital technology, memory, perception, and social space. He received a BA from the Departments of Visual Art and Art and Archeology at Princeton University. His solo exhibitions include The Lever House Art Collection, The Middlebury College Museum of Art, Hudson Valley Center for Contemporary Art, and The Flag Art Foundation. His works are included in the collections numerous museums including of The Museum of Modern Art (MoMA), The Whitney Museum of American Art, The Museum of Fine Arts, Boston, The Cleveland Museum of Art, The Brooklyn Museum, The San Francisco Museum of Modern Art, and The New York Public Library Print Collection. This year, his work is included in the major exhibition at New York’s Museum of Arts and Design (MAD): “Out of Hand: Materializing the Post Digital”. This exhibition examines digital production in art, architecture and design since 2005. He is also presenting a monumental public sculpture in front of the museum on Columbus Circle in conjunction with the MAD exhibition and the City of New York. He is co-represented in New York by Tracy Williams, Ltd., and Carolina Nitsch.
Image: Courtesy Richard Dupont and Artists Rights Society, New York
.
.
.
.
.
.
.
.
source: deceptology

Mr. Dupont makes these sculptures based on a full-body scan of his own body. He says viewers relate to them like they’re three dimensional illusions:
The viewer walks around the figures and gets all these different perspectives as the surfaces change. That’s one way the distortions are interesting, because no two perspectives are the same. A lot of people see them and think they’re flat, then realize they’re objects—that’s a hard thing for the brain to process immediately. But it’s not just retinal, it’s also physiological: There’s a queasiness, an anxiety caused by the brain not being able to understand the two things at once.
.
.
.
.
.
.
.
.
.
source: sculpture

Richard Dupont (b 1968, New York City) is an American artist. His work includes drawings, installations, sculptures, and prints; and concerns themes of the human body, digital technology, memory, perception, and social space. He received a BA from the Departments of Visual Art and Art and Archeology at Princeton University. His solo exhibitions include The Lever House Art Collection, The Middlebury College Museum of Art, Hudson Valley Center for Contemporary Art, and The Flag Art Foundation. His works are included in the collections numerous museums.