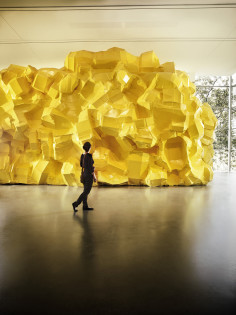 source: richardmaloycarbonmade
ichard Maloy is an artist, born in Auckland, New Zealand, in 1977, Maloy graduated with a Bachelor of Fine Arts in 2000 and a Master of Fine Arts in 2002 from the University of Auckland. He has exhibited widely in New Zealand and Australia since 2000. His recent exhibitions include; Attempts, Sue Crockford Gallery, Auckland, 2010; Ready to Roll, City Gallery Wellington, 2010; Raw Attempts, ARTSPACE, Auckland, 2009. Much of Maloy’s work is concerned with the act of art making and the connections between artists, art work and audience. This is played out in a range of artistic mediums including sculpture, photography, installation and video. In Raw Attempts Maloy’s largest art work, he turns the constructs of the gallery and process of art making in on itself, creating an ever evolving sculptural structure made from cardboard and paint over the 85 day duration of the exhibition. Often when encountering Maloy’s work the audience’s perception and art historical context becomes blurred, when viewing his recent photographic works, Attempts, the audience is present with 1:1 scale photographic copies of art student’s studio work tables; at a glance they look like paintings. Maloy cleverly draws on historical painting ideologies and mixes these with ideas associated with a post-modern art practice. In 2009 Maloy was awarded the inaugural Fulbright Wallace Award and travelled to the US as a visiting Fulbright Scholar completing an artist residency at the Headlands Centre of the Arts in San Francisco. Maloy has a number of works in both private and public collections, including a number of works in the Auckland Art Gallery, Chartwell Collection and Art Gallery of New South Wales.
.
.
.
.
.
.
source: stylesfeed
site-specific installation Yellow Structure (2016) by Richard Maloy. Seen from a distance, Yellow Structure will appear to be a solid, golden, rock-like structure that is minimal in nature. Closer inspection by visitors, however, will reveal its degradable and humble construction from common industrial materials such as cardboard, paint and tape.
.
.
.
.
.
.
.
source: orientaldailyoncc
像奧克蘭藝廊呈獻的裝置《Yellow Structure》，是新西蘭藝術家Richard Maloy全新特定場域之作，貌似岩石，一片鮮黃色，非常搶眼，原來它是利用紙皮、膠紙、油漆等工業材料製成，觀眾更可以走入作品，徹底體驗不一樣的黃色世界。