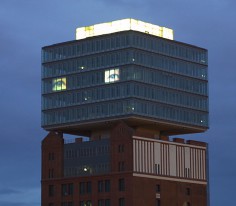 source: richardthe
The City awakes, a building sees. An office development which towers over Berlin historic part around the Oberbaum bridge becomes the face of the metropolis with the eyes of its inhabitants. People are invited to look into a box in which two cameras are filming their eyes. The images are projected live onto two windows of the office tower across.
The installation is located at a neuralgic location of Berlin’s history. Oberbaum bridge used to demarcate the border between East and West Germany. The former Narva bulb factory represents the failure of the eastern economy and new developments located on its former grounds, such as the glass tower, are symbolic for the processes that shape the Berlin of today. Omnivisu seeks to ask about the role of a city’s inhabitants within these developments.
Omnivisu is a TheGreenEyl project.

Richard The is a designer, artist and educator. His work investigates the aesthetic potential of technology as a means for creative expression and social interaction. His interdisciplinary practice ranges from design to research and he creates visual identities, installations, objects, graphics and algorithms. After having studied at University of the Arts Berlin and the MIT Media Lab he has worked at Sagmeister Inc. and led a design group at the Google Creative Lab in New York. He is a co-founder of the transdisciplinary design Studio TheGreenEyl and is an adjunct professor at School of Visual Arts Interaction Design and Parsons New School for Design in New York.