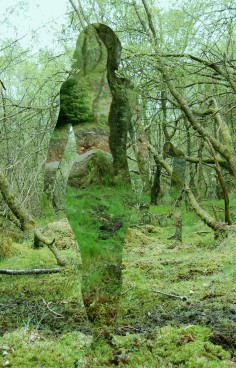 source: tonsdeazul
Luz do sol, o subir e descer da maré e a costa. Esses elementos tornam-se mutáveis reflexos em esculturas humanas e de espécies cretáceas. A proposta de “Tide Flow – Time Flow”, do artista Rob Mulholland, é refletir sobre nossa jornada evolutiva. As silhuetas são moldadas em aço inoxidável. O resultado visual é fantástico.
.
.
.
.
.
.
source: robmulhollandcouk
Rob studied at Edinburgh College of Art and graduated with a BA [Hon ] degree in 1986. Since his emergence in the early 1990′s Rob Mulholland has created thought provoking, conceptual art installations such as ‘Green Man’ 1991, Glasgow which was over 300 feet long and made from over 300,000 re-cycled drinks cans. His current series of mirrored, reflective sculpted figures absorb their environment and reflect the constant flux of movement day by day.
His work explores the human relationship with the wider environment. His approach is not judgmental, more reflective and questioning about the ever-changing world around us. The human desire to leave a trace of ones-self for future generations has always intrigued him. It’s a driving force to create and leave a semblance of our-selves as individuals and as a society. The reflective figures ask us to look again and consider the symbiotic relationship we have with our natural and man-made environment.
Each new installation adds to his visual dialogue. The themes of ‘sense of place’ and ‘ancestry ‘ persist in many of the works. In recent studio based installations Rob as introduced projected images over the figures. This new development in his work reflects his interest in the passing of time as the images projected are in slow motion. A single drop of water takes minutes to fall and disperse. The mood is poignant and atmospheric and allows us just a brief reprieve from the frenetic world.
.
.
.
.
.
.
source: mymodernmet
UK-based artist Rob Mulholland recently created a new site-specific installation for a group exhibition at the Caol Ruadh Sculpture Park in Scotland. Unlike his forest blending glass statues, Tide Flow – Time Flow consists of stainless steel forms that stand on the shores of the Kyles of Bute, one of the most stunning areas of coastal sceneries in Scotland.
The mirrored figures reflect the beautiful scenery around them. As one visitor stated, “They’re shape changers – depending on where you stand – because they take to themselves the colour and texture of their surroundings.”
Mulholland describes them this way, “As the tide ebbs and flows, the reflections of the sun and sea constantly alter the appearance of the mirrored stainless steel forms creating a kinetic surface that moves to the rhythm of the sea. The Cretaceous sea-forms, standing alongside the human figures, are a reference to our genetic past and ask us to consider our evolutionary journey thus far.”
Mulholland’s work explores the human relationship to the natural environment. He asks the view to reflect and question the ever-changing world around us.
The Caol Ruadh Scupture Park just opened on June 24. It will showcase and sell contemporary sculpture created in Scotland. Amongst open woodland, massive rock bluffs and grassland running to the shore, intriguing sculptures are just waiting to be found. Tide Flow – Time Flow is open to the public until the end of September 2012.
.
.
.
.
.
source: news99ys
当地时间2012年7月报道，艺术家Rob Mulholland在苏格兰打造出十分特别的“镜面雕塑”，不同于Rob Mulholland以往的作品“森林人形镜面雕像”，他新作品的材质采用不锈钢，并且可以反射出周围的环境，与周围融为一体。 “镜面雕塑”“镜面雕塑” “镜面雕塑”当地时间2012年7月报道，艺术家Rob Mulholland在苏格兰打造出十分特别的“镜面雕塑”，不同于Rob Mulholland以往的作品“森林人形镜面雕像”，他新作品的材质采用不锈钢，并且可以反射出周围的环境，像是幽灵般的身影在湖面出现一般，却又与周围融为一体。