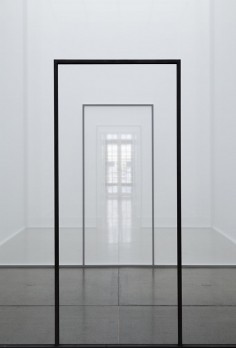 The US artist Robert Irwin will present his new installation Double Blind in the Secession’s main gallery. The work is a response to the properties of the space, a way of working for which the artist has coined the term “site-conditioned.” Double Blind is one of only a few site-conditioned installations that Irwin has realized in Europe and the most recent opus in the artist’s long-term engagement with the themes of perception and experience, with light, aesthetics, and questions of reality and illusion.

For his exhibition Dotting the i’s and Crossing the t’s: Part I in spring 2012 Irwin cut a single square out of each of four tinted windows in the Pace Gallery in New York, allowing the sounds and smells of the surroundings outside to permeate the exhibition space. On facing walls he hung high gloss polished monochrome paintings in black and white whose surfaces reflected the environs: windows, other works, the exhibition room, visitors. The intervention was at once subtle and effective and presented in condensed form many of the questions about art that have been with Irwin for decades, first and foremost the question of how we perceive our environment. “You don’t think whether it’s art or not art. It’s just about what you’re seeing or not seeing,” is how he described his approach to art in an interview.* For his work Scrim Veil – Black Rectangle – Natural Light, first realized for the Whitney Museum of American Art in 1977 and now re-installed there thirty-six years later,** the intervention in space was likewise minimal. “But the room was not quite empty—and in Mr. Irwin’s work, ‘not quite’ can mean the entire world.”***

Irwin’s exploration of perception and experience dates back to the beginning of his career as an Abstract-Expressionist painter in Los Angeles in the 1950s. Soon plagued with doubts about the adequacy of the panel painting as a depiction of reality, in the 1960s he pioneered the Californian Light and Space movement, which also included Larry Bell, John McCracken, James Turrell, and Doug Wheeler. Using Plexiglas, translucent fabrics, reflecting surfaces, and fluorescent tubes he sought to forge a connection between his works and their environment. A central question that ushered in a change of paradigm in his work was: “What kind of a ‘reality’ was this that allowed itself such abstraction as to demand that the world end at the edge of my canvas? Yet what kind of a world would it be if there were no such limits?”****

In his efforts to find an art form not limited by the size of the canvas, Irwin in 1970 gave up his studio and with it the idea of art defined by its status as an object in favor of art as a phenomenon. Since then he has been realizing works that he calls “site-conditioned.” Unlike “site-dominated,” “site-adapted,” and “site-specific” works, which refer to and involve a specific location but remain self-contained works of art, his installations only become phenomena in response to the space surrounding them and the conditions prevailing there. This makes it impossible to transfer them to some other location. An inherent quality of these works is their ability to transcend the boundaries between art and architecture, art and landscape, art and urban planning, and art and utility.****

Since the mid-1970s Irwin has realized almost sixty of these site-conditioned works, including the rendering of the plaza and the rooms housing the permanent collection of the Dia Foundation in Beacon, New York, and the garden of the Getty Center in Los Angeles. Currently, two new works—Who’s Afraid of Red, Yellow & Blue3 II,I and Piccadilly—are showing at Pace London in the historic rooms of the Royal Academy of Arts.

Double Blind is Irwin’s response to the characteristic features of the main gallery at the Secession. The room’s absence of windows makes it a neutral container for art, its hermetically sealed quality enhancing the impression of a massive, isolated volume. The grid structure of the ceiling and floor underscore the room’s austere appearance and lend it rhythm. The world outside nonetheless becomes tangible through the daylight streaming in from above. The changing intensity of light in the room allows visitors to sense different times of day and what are frequently rapid changes in the weather. The installation Double Blind consists of thirty room-high frames with translucent fabric stretched over them following exactly the lines of the grids that define the room and thus forming three volumes. Depending on where the viewer is standing and on the direction and intensity of the light, the appearance of the installation changes, as does that of the room itself. The door to the garden behind the Secession building stands open, allowing the viewer to see and sense the world outside.
.
.
.
.
.
.
.
.
source: pacegallery

For more than six decades, Robert Irwin (b. 1928, Long Beach, California) has explored perception as the fundamental issue of art. Irwin, who began his career as a painter in the 1950s and became the pioneer of the L.A.-based “Light and Space” movement in the 1960s, has, through a continual breaking down of the frame, come to regard the role of art as “conditional,” or something that works in and responds to the specific surrounding world of experience. Irwin has conceived fifty-five site-conditional projects since 1975, ranging from the architectural and grounds design of Dia: Beacon Center for the Arts (completed in 2003) to the lush Central Gardens for the Getty Center in Los Angeles, California (completed in 2005). Robert Irwin became the first artist to receive the John D. and Catherine T. MacArthur “Genius” Award in 1984. Robert Irwin has been with the Gallery since 1966.
.
.
.
.
.
.
.
source: stuartcollectionucsdedu

Robert Irwin began his career as a painter in the late 1950s in California. In each series of canvases during the 1960s Irwin questioned the fundamental characteristics of his medium: the nature of the painted mark, the quality of light, and the limitations of the canvas itself as a bounded, rectilinear support. This process of inquiry led him to give up painting altogether by 1970. Irwin decided to respond to situations, rather than produce autonomous works of art in the isolation of his studio. This attitude led to several architectural installations in museums and other sites which provoked viewers into an awareness of their own processes of perception, as well as their expectations of art.

For his contribution to the Stuart Collection, Two Running Violet V Forms (his first permanent installation in California) Irwin was drawn to the eucalyptus groves east of the Mandeville Center and adjacent to the Faculty Club. The contradiction inherent in this manmade forest appealed to him; the geometric regularity of the grid of trees is balanced by the infinite variety of light and detail which the natural setting nevertheless provides. Irwin installed two fencelike structures in V-forms amidst the trees. The “fences” are blue-violet, plastic-coated, small gauge chain-link fencing supported by stainless steel poles which average twenty-five feet in height. The structure maintains a constant elevation as the hillside terrain drops gently beneath it. Purple flowering iceplant, echoing but not matching the color of the chain link, is planted under the fence.

At no point is the fence an obstacle; rather it acts as a screen reflecting the changes in light throughout the day and the year, the moment and the season. Its gentle introduction of industrialized geometry recalls the unnatural grid which organized the grove, and suggests a fantastic or uncanny intrusion into the forest. For people who walk the grove’s various paths, Irwin’s sculpture provides an ever-changing perceptual experience – sometimes dramatic, and sometimes so modest it seems to disappear.

Irwin was the recipient of a prestigious MacArthur Foundation award in 1984. In 1992, he was commissioned to create the Central Gardens at The J. Paul Getty Center in Los Angeles. In 2000 Irwin redefined an old Nabisco factory into the Dia:Beacon Art Center in Beacon, NY. He lives in San Diego.