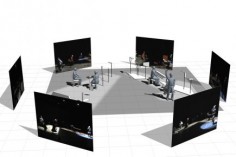 At each simultaneous screening of footage FRAGMENTATION from Robert Lepage’s epic Lipsynch, spectators invariably believe that the images were designed for the groundbreaking projection concept known as the ReACTOR. In fact, the scene in question — eleven minutes from the “Thomas” chapter that bring to light the neurosurgeon’s alcoholism, a vocal performance in a jazz club and an alcohol-fuelled breakdown — was written well before Robert Lepage had heard of the ReACTOR. Nonetheless, it seemed so tailor-made for it that the adaptation was quickly and easily accomplished.
FRAGMENTATION is the ReACTOR’s third project to date. Eleven minutes of selected footage, filmed in the afternoon before each show at the Théâtre Denise Pelletier in Montreal, were made into a loop after minor adaptation by Robert Lepage. The choice of this sequence is due to its underlying concept. In the ‘Thomas’ chapter of Lipsynch, the set is created from seemingly random bits and pieces that lie scattered over the stage. When seen through the lens of a camera mounted at a specific angle, these inchoate elements are transformed into a hospital cafeteria table, a piano, and a table in a jazz bar, the transition created as the camera moves between preset positions. The images of this sequence, filmed simultaneously by 10 cameras positioned on five of the corners of the hexagon surrounding the set, are projected on five of the ReACTOR’s screens in an orientation consistent with their camera angle. The images from the rotating camera onstage and its preset viewpoints appear on the remaining screen. Spectators see what these positions reveal but also, walking around the projection device as if they were on the set, see reality from five distinct perspectives.

The ReACTOR system is an hexagonal projection environment offering the audience a physically immersive three-dimensional space of representation that constitutes an augmentation and amalgamation of real and virtual realities. The audience can choose to move freely around the hexagon to view individual screens or step back and watch the screens simultaneously.
Each screen displays the same scene from a film or a performance specifically designed and recorded for this installation, in time synchronicity but from a different perspective, analogous to the architecture of the space within which it is projected.

Versatile in every form of theatre craft, Robert Lepage is equally talented as a director, playwright, actor and film director. His creative and original approach to theatre has won him international acclaim and shaken the dogma of classical stage direction to its foundations, especially through his use of new technologies. Contemporary history is his source of inspiration, and his modern and unusual work transcends all boundaries.
.
.
.
.
.
.
.
source: kuchelmeisternet
Fragmentation is based on the theatre play Lipsynch, written and directed by Robert Lepage.

As a member of an audience observing a theatre performance, one is often removed from the stage and located somewhere within the seating area. Particular in larger venues, the perspective is an aerial one and with a significant distance between observer and the action on stage. This arrangement can limit the sense of intimacy, the audience is disconnected, details might pass unnoticed and the point-of-view is fixed. In this work, we overcome these limitations by sacrificing the live aspect of the performance by a recording and replacing the theatre stage with a video installation. The focus of this technical implementation is to construct and recreate a true-to-life experience of the events on stage for the audience in an exhibition.

Lipsynch has a complex multi-layered narrative structure and is with 9h too long for an exhibit. For the installation, we selected a single scene, 12 minutes long, which is semi self contained in its narrative and recorded the performance in February 2010 at the Théâtre Denise Pelletier, Montréal. The result is a stereoscopic multi-perspective video installation for the hexagonal stereoscopic back-projection platform RE-ACTOR. Multi-perspective visualisation constitutes a novel method of documenting the entireness of an event, by recording from multiple points of view. In combination with stereoscopic imaging, it captures two modalities of three-dimensional representation, perspective and depth. These modalities are then applied for display in a hexagonal stereoscopic multi-screen projection environment, the RE-ACTOR* platform.
.
.
.
.
.
.
.
source: lacasernenet
Robert Lepage was born in Quebec in 1957. He took an early interest in geography, and when he later discovered all art forms, theatre caught his particular attention. He entered the Conservatoire d’art dramatique de Québec in 1975 at the age of 17. After a study period in Paris in 1978 he returned to Quebec and became involved in many creative projects, gaining experience as actor, author and director. Two years later he joined the Théâtre Repère.

An international recognition from the start
In 1984, his play Circulations toured Canada and received Best Canadian Production award at the Quinzaine Internationale de Théâtre de Québec. The next year The Dragons’ Trilogy gained him an international reputation, quickly followed by Vinci (1986), Polygraph (1987) and Tectonic Plates (1988). In 1988 he formed his own professional management company, Robert Lepage Inc. (RLI).
.
.
.
.
.
.
.
source: unshowdemotartsnet