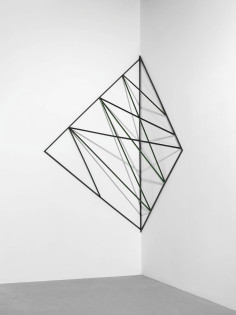 source:artnetcom
Eva Rothschild is a contemporary Irish artist known for her sculptures which employ a broad range of materials. Constructed with an irregular geometry influenced by the work of Constantin Brancusi, Rothschild’s sculptures explore the relationship between materiality, Classical architecture, and New Age spiritualism. “I use segmentation a lot, building something from repeated units, so that there’s almost a suggestion that they can be taken apart,” she has explained. “In a way I never think of a piece as a unified whole. It could always come apart. In the finished product the material is still open to transformation.” Born in 1972 in Dublin, Ireland, Rothschild studied at the University of Ulster in Belfast before briefly relocating to Glasgow. The artist went on to receive her MFA from Goldsmiths in London in 1999, where she continues to live and work. Today, Rothschild’s works are held in the collections of the Carnegie Museum of Art in Pittsburgh, the Irish Museum of Modern Art in Dublin, and the Tate Gallery in London, among others.
.
.
.
.
.
.
.
source:friezecom
The artist discusses the objects, ideas and artworks that have shaped her thinking. With an introduction by Declan Long

Over the past two decades, Eva Rothschild has created an ever-updating ensemble cast of sculptural characters. Her boldly zig-zagging and skinny, stripy, precariously propped-up forms appear to have strong, stand-alone personalities – variously antic and assertive, enigmatic and energetic – but they are profoundly interdependent. In a 2010 interview with Laura Hoptman (the curator of painting and sculpture at New York’s Museum of Modern Art), Rothschild emphasized the essential, compare-and-contrast complementarity of her sculptures: ‘I tend to think of the works together as a group,’ she said, and so the task of gauging ‘what they might need materially’ requires sensitivity to what others in their company ‘might lack or benefit from’.1 Her works are always, in this sense, under each other’s influence.

Often, this spirit of practical reciprocity is evident in the arrived-at forms of individual pieces. Skeletal pedestals connect or contrast with the sharp, spiky figures and bulbous, perforated shapes they support. Single sculptures are generally composed of identifiably distinct segments (piled-high rolls of coloured-cast gaffer tape, Jesmonite blocks or beaded, plaster-and-polystyrene orbs, for instance), while the clear, firm, black lines of certain structures are patterned with punchy colours that defiantly break up visual continuity (as in Empire, 2011, her Public Art Fund commission for New York’s Central Park, now on display in Minneapolis at the Walker Art Center’s sculpture garden). There is a persistent emphasis on plurality and multi-part assembly: nothing can be just one, settled, self-contained, wholly unified thing.

An Array (2016) – featured in ‘Alternative to Power’, Rothschild’s 2016 show at The New Art Gallery, Walsall – is typical, too: a closely grouped cluster of jet-black sculptural volumes, in an assortment of styles, collectively perched on a low platform. Solid, stubby cylinders, roughly ridged at the sides, share the constrained space with slender, see-through, steel-frame structures and other, peculiarly precious-looking handmade things: some like deflated footballs, bizarrely and beautifully wrapped in intricate beading; another like a tangled hose, bundled loosely into an irregular sphere, but toughened and lusciously lacquered. Posing together on their polished platform, these pieces become a statement of close-knit diversity: a family photo of Rothschild’s art. As its title suggests, An Array is a displayed selection, an indicative sample, maybe, of enduring interests and necessary back-and-forth antinomies: the towering, teetering presence of block-on-block columns; the drawing-in-space of open-work construction; the fundamental perfection of basic geometric shapes; the mystery and allusiveness of more organically imprecise objects; the luxurious, inhuman sheen of glossy surfaces; the chance effects of daily, methodical, studio-based handcrafting.

This monochromatic ‘array’ exemplifies something of the fastidious, measured variety – the controlled, intelligent play – advanced by Rothschild throughout her career. (During this time, she has moved from her home town of Dublin to Belfast, where she studied at art college, then on to Glasgow, spending formative years within that city’s industrious 1990s art scene, and on again to London, where she now lives.) But it’s worth noting, perhaps, how that word ‘array’ has other relevant associations: denoting, for instance, both dressed-up adornment and marshalled military power. Rothschild’s sculptures, at their most outgoing, can similarly suggest combinations of the flamboyant and the forceful. Frequently, their spatially commanding verticality evokes the authority – and, often, the absurd extravagance – of outlandish buildings and grand monuments. Ancient or antique styles of architecture are, in particular, an abiding influence (along with the esoteric bodies of knowledge they relate to). But many of her striding, arching and stretching forms also occasionally express something of the way power still declares itself materially: through structures and symbols that dominate, demarcate or selectively decorate our public spaces. As such, sometimes, Rothschild’s crookedly minimal creations hint – in their melancholy and mischievous, plaintive and protean oddity – at the unrealizable fantasy of permanence that underpins vaulting visions of authority.
.
.
.
.
.
.
.
.
source:mutualartcom
Rothschild’s practice involves both conceptual and socio-political ideas alongside traditional approaches to making sculpture. Through an investigation into form and materiality, her works balance, stack, wrap and knot materials around geometric shapes and structures – such materials that often appear to transcend their physical limitations, hover between representation, symbolism and actual form. By deliberately destabilizing physical and visual characteristics in her work, Rothschild not only questions the aesthetics of art, in particular minimalism, but also those of belief in social liberation and spiritual movements.

Rothschild was born in Dublin, Ireland; she lives and works in London, UK