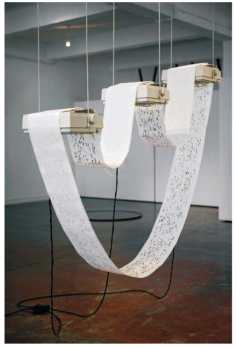 Rowan Smith was born in 1983 in Cape Town, South Africa and has been hailed as one of the country’s ‘Bright Young Things’ by Art South Africa, the continent’s leading art publication. Smith completed his BA in Fine Art at the Michaelis School of Fine Art in 2007 (winning the Michaelis Prize for top graduate) and received his MFA degree at the California Institute of the Arts in 2012. Upon graduating he was awarded the prestigious Joan Mitchell MFA Grant. Smith presented his acclaimed debut solo exhibition Future Shock Lost at WHATIFTHEWORLD in 2008, followed by If You Get Far Enough Away, You’ll Be On Your Way Home in 2009 and No Everything in 2014. He has also exhibited a solo presentation with the gallery at VOLTA NY in 2012. Smith has appeared in a number of group exhibitions internationally, including COME ON YOU FUCKERS (in collaboration with Ingrid Lee) at The Wulf in Los Angeles, Objects of Revolution at Dominique Fiat Gallery in Paris, Ampersand at the Daimler Contemporary in Berlin, Circulate, Exchange at the University of California Los Angeles and recently Green Flower Street at the Istanbul Off Biennial. The artist’s work is included in the Hollard Collection in Johannesburg.

Rowan Smith’s work takes the form of a multidisciplinary semiotic investigation into the ways in which cultural signs and signifiers can be read as artefacts. He examines how the meaning embedded in these artefacts fluctuates (and frequently deteriorates) in relation to ever-shifting sociopolitical contexts; often assuming a self-critical position which responds to his locality. Most recently, Smith has focussed this lens on the complexities and contradictions of post-apartheid South Africa in terms of class, capitalist economy, nationalism, globalisation and the relationship between the pervasive legacy of the past and the undefined present. He examines these concepts through acts of appropriation, defacement, destruction and reparation. By visualising the destruction of a society in this way, he intends to highlight the flaws embedded in its underlying structures that they may be acknowledged and confronted. Crucially, the physical materiality of the works is as important to his investigation as the concepts informing them; the two work in tandem in order to extrapolate the themes inherent to the artwork.