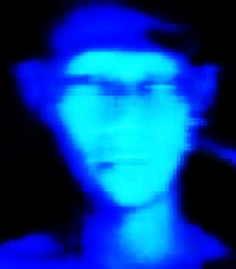 Light Painting experiment with Kikuchi from the Butoh dance group Sal Vanilla. Tokyo 1999-2000
(video camera, slow shutter, video projector, video feedback)
Editing by Eran Rothschild
Music “Beat Box” by Sieg Uber Die Sonne
.
.
.
.
.
.
.
source: patrickrochon
Light Painting by Patrick Rochon
I connected with members of Sal Vanilla a Butoh dance group. Butoh is a contemporary dance form born in the sixties. We started a series of collaborations, Light painting at first, then video, then live performances. The collaboration between Sal Vanilla and I, was pure symbiosis. We were like one creative living organism. With barely any words use on the shooting, meaning we barely spoke, we created a serie of images that never been seen before, something new. They moved in such a unique way and took shape with their bodies like they had one collective brain. It was like one creature made of different bodies. With that kind of subject, the light that came out of me with was beyond anything I did so far. Just the right touch, just the right colors, just the right timing, just the right exposure. It’s not always like that. Some photo shoot did create strange and sometimes disappointing results but with Sal Vanilla, so many images came out good. On a roll of 36 I got at lease 12 strong and unique images…
.
.
.
.
.
.
.
source: redefinemag
Light painter Patrick Rochon offers a surprising antithesis to the moonlit works of Adam Lach Lunaris. Rochon also uses minimal sources of light, but as energy on the canvas of the human body. Having lived 10 years in Tokyo, Rochon’s encounter with a Butoh dancer spurned his fascination to express the dance through paintings of light, using photography as a method to capture his art. At the heart of his light paintings with Butoh group Sal Vanila, he expresses the inspiration of light energy that is naturally emitted by living bodies.
.
.
.
.
.
.
.
source: asianweek
Japanese performance group Sal Vanilla brought its Zen-infused mixed-media art to the tiny city-state of Singapore.
[inter/action] enjoyed a three-night run at Little Asia 2003, a new mini-festival that will also present Australian percussionist Ben Walsh and the country’s own Daniel K. & Co. over the following weeks. Singapore recently joined Little Asia, an alliance of Asian and Australian presenters aimed at initiating cultural exchange for small-scale experimental theater in the region.
Tokyo-based Sal Vanilla may have been founded by two ex-Dairakudakan members, but this hour-long work had none of the older butoh company’s lurid theatricality and grotesque humor. In fact, it didn’t resemble butoh in any obvious manner.
[inter/action], which premiered in Korea last year, knits stark, all-male dancing with complex lighting schemes, giddy computer-generated projections and a live electronic score by Metro 999. The intricate web of images and sounds brilliantly envision urban life, a space awash with information.
In the black box-style Esplanade Theatre Studio, the action mostly occurred on a raised, H-shaped stage — a runway bookended by oblong platforms against large white screens Ñ with the audience and production team seated lengthwise on either side. The performers were also free to roam on the ground.
Bareheaded men, looking almost sexless in their white-and-gray sweatsuits, gestured with small flashlights in the darkness. As they passed each other in two rows against the surging electronica, the twinkling torches traced semi-circles in the pitch-black air, as if fireflies had come to visit.
Two opposing camps of three emerged from this opening group. How these men moved and related to each other (as other media fought for everyone’s attention) formed the piece’s ideological core: Technology, however advanced and liberating, has blunted our social skills and our humanity.
When they shivered or thrashed their arms in unison, you could feel their collective anxiety. They linked arms in a processional cycle, but never connected. Two men on opposite ends of the stage reached out in vain. When they rolled themselves into an endless chain of human logs, that relentless sequence visualized their shared isolation in a busy, busy world.
It wasn’t just the cool austerity, the wildly expressive soundscape or the intensely focused performers that was so attractive here. Every medium took equal footing, which allowed you to choose what you saw, making each viewing a uniquely personal experience. That, I think, is what makes a Sal Vanilla show so special.