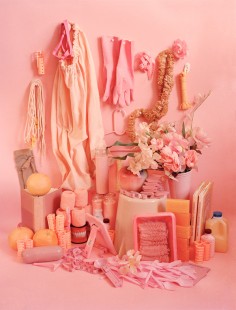 Sara Cwynar is inspired by the aesthetics of antiquated studio photography and the unnatural cleanliness of contemporary commercial imagery. Her practice exists at the juncture of old and new, analog and digital, nostalgia and futurism. Cwynar creates assemblages from found objects and pictures; she then photographs the assemblages and reproduces the images as c-prints. In her own words, she takes these found elements “out of the shared image world and into a space for personal, often very obsessive intervention.” Although Photoshop plays a role in the final work, nearly every stage of Cwynar’s process takes place in pre-production. The artist’s still-life images are highly manipulated while maintaining references to reality, foregrounding the artist’s interest in photography’s power to deceive.
.
.
.
.
.
.
.
source: bjp-online

“Buried in the latter part of the book, Barthes talks about ‘flat death’, and this idea that photography can bring back what has gone, and also remind you of what’s [no longer there],” says Cwynar, who lives and works in New York.

“I started to think about this idea in relation to discarded objects and images, and [how I could] resurrect them. Collecting and reworking found images has always been part of my practice, but this gave me a new framework in which to work.”

Cwynar, who studied graphic design before taking up photography, started the project last June. She uses images sourced from darkroom manuals, old encyclopedias, flea markets and the New York Public Library Picture Collection, which she manipulates “to create altered versions of the original image”. Her process involves scanning and enlarging the images to create prints on which she “rebuilds” the original images using collected objects and occasionally, reprints of the image itself. Cwynar then photographs the artworks and from these produces digital C-type prints.

Her process is a “circular” one, beginning with a found photograph and ending with a new image, and In between, the works are “sculptural installations”. “I always start with physical images, never those sourced from the internet. I like the way a picture changes over time – how the colours may warp, for example. I’m interested in the idealised and very specific view of the world that is present in printed matter from the twentieth century, but which has gone now [in light of] the internet.

“I’m drawn to this period where printed matter perhaps had a different resonance. I think it is important to save and to re-present this in response to the way we respond to images now, which is more quickly and less carefully.”

Describing herself as “a compulsive collector”, (“I have tons of boxes in my studio filled with objects from junk drawers such as old soaps, obsolete technologies – perhaps out of date iPods and cameras”), Cwynar explains that mixing the old and the outdated with new ways of making images is an important element of her practice.

“I like to create images that are anachronistic – that can be read as both new and old at the same time. I will continue to work in this way for sure, but I want to extend what I’m doing by finding new ways [of working]. I’m interested in vernacular images, and how this huge archive of images trails behind us as we make new images. I could easily use Photoshop to make these images but I think it’s important they exist in the real world.”