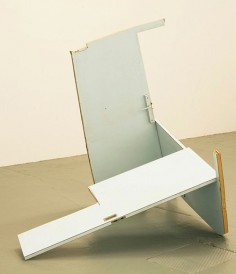 In 2011, Sarah Braman sectioned an old camper trailer and scattered its pieces throughout a gallery like flotsam. In some places, she added gentle accents of lavender spray paint; in others, she affixed deep-hued Plexiglas cubes like curiously empty fish tanks. Some of the camper’s chunks were tipped off their natural axes and some of its innards—a mattress, a window—were affixed to the walls like confident, stately paintings, as if they were always meant to be art.

Braman has a penchant for seeing the most common of objects—desks, cushions, file cabinets, tents—through the eye of an outsider. She extracts an unremarkable portion of the world, makes a few quick alterations, and then presents something fresh and unexpected. It’s a sleight-of-hand move that characterizes great assemblage, and Braman does it using a painter’s transformative touch. With her own vocabulary of marks and materials, she gives motion to her sculptures, sending them tumbling through the world, accreting color and detritus as they go. If you look at these objects with art in mind, they suggest an idiosyncratic lineage of artists—Odilon Redon, Robert Rauschenberg, John McCracken, Rachel Harrison—but the work itself carries an attitude of casual disinterest toward the -isms of fine art.

Braman lives with her family outside of Amherst, Massachusetts, and, occasionally, in the Chinatown neighborhood of Manhattan, a few blocks away from CANADA, a gallery she co-runs with her husband, Phil Grauer; Suzanne Butler; and the artist Wallace Whitney. Since 2002, the space has developed a singular, adventurous position in contemporary art, exhibiting a family of artists (Xylor Jane, Brian Belott, Michael Mahalchick, Katherine Bernhardt, Michael Williams) who are both visually cohesive and consistently unpredictable.

I spoke to Braman at my apartment while Grauer tended to their newborn in the next room. A few weeks later I attended the gallery’s annual summer sleepover at a Quaker retreat center in rural Massachusetts, where Braman and Grauer had gathered several dozen artists and friends to play badminton, strum instruments, sing, make piles of drawings, and spend a nice, long weekend forgetting about the buzzing, urban art world 150 miles down the road.
.
.
.
.
.
.
.
source: wburorg

Sarah Braman, an Amherst artist whose work combines abstract painting and sculpture to disorienting, curious effect, has been named the winner of the Museum of Fine Arts’ 2013 Maud Morgan Prize.

“Known especially for her sculptures, which combine used items with jewel-toned spray paint or translucent boxes upended at light-catching angles, Braman breathes new life into found materials,” the museum reports. “She has incorporated objects as diverse as a dirty desk, spray painted foam rubber, the roof of a truck, wooden doors, and a chrome vanity with highly formal, minimal, and clean elements like cast steel and brightly colored Plexiglas. The resulting works are carefully balanced compositions that bring a sense of discovery via disorientation as you move around their complex structures, at once delicate and powerful.”