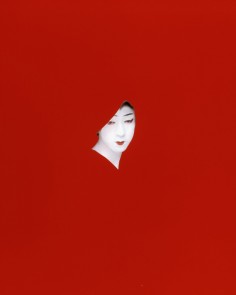 Each of the “objects” depicted in Sarah Charlesworth’s series Objects of Desire is removed from its visual context, appearing instead as a detached fragment hovering in a lush field of color. Isolated from the signifiers we use as cultural reference points, they reveal much about our assumptions and values. In the present work, Charlesworth subverts our expectation of gender roles and the stereotype of the passive Japanese female.

The image is not of a geisha but of a male Kabuki actor. In Kabuki, a genre of Japanese theatre that originated in the early 17th century, female roles are traditionally played by cross-dressing men who in the early days were also available for hire as prostitutes. In Kabuki, the color red is traditionally associated with passion, heroism and righteousness.

Charlesworth’s gender bending image challenges both our sexual and cultural assumptions, framing the passive, androgynous male as our object of desire.
.
.
.
.
.
.
.
source: artbook

For a 1983 Postmodernism and Photography panel with Douglas Crimp, Richard Prince and Laurie Simmons, Sarah Charlesworth wrote, “Pop art pointed out that popular culture existed and was not in itself lethal to Art. Postmodernism is increasingly a part of that culture. But it is a critical part. The artificial, the posed, the stylized, the familiar are not so much a threat to this art, but a rich and rigorous syntax of social exchange and personal experience. To reveal through exploration and expression of convention its structures and meaning, its language of form, is a step toward consciousness within.” Red Mask (1983) is reproduced from Sarah Charlesworth: Doubleworld, published to accompany the late artist’s retrospective at the New Museum.
.
.
.
.
.
.
.
source: artspace

Sarah Charlesworth was a conceptual artist and photographer whose work sought to bridge the gap between fine art and a critical practice of photography. Trained as a painter and introduced to conceptual art in college, Charlesworth developed a deeper interest in photography and its ability to deconstruct our shared symbols and public imagery in ways that articulate and question the values and beliefs of our culture.

Charlesworth’s long career—with over 50 individual exhibitions, a presence in major museum shows and collections, and a traveling museum retrospective (organized by SITE, Sante Fe)—made her both a seminal figure in photography as well as a leader in feminist art. Her work uses photography to probe the role of images in society, considering the way in which the photograph defines or is defined by sexuality, gender, politics, psychology, and spirituality.
.
.
.
.
.
.
.
source: sarahcharlesworthnet

Sarah Charlesworth (1947-2013) was a visual artist and photographer who exhibited widely in the US and abroad. With over 50 individual exhibitions, a traveling museum retrospective (organized by SITE, Santa Fe) and presence in many major museum shows and collections, Charlesworth was one of the seminal figures in creating work that bridges the gap between fine art and a critical practice of photography. Charlesworth’s body of work explores issues concerning the language of photography within contemporary culture. In addition to her photographic work, Sarah Charlesworth taught photography for many years in the graduate program at the School of Visual Arts in N.Y., and later served as faculty at Princeton University’s Lewis Center for the Arts. Charlesworth’s work appears in the collections of the Metropolitan Museum, NY, the Museum of Modern Art, NY, the Whitney Museum, NY, the Solomon R Guggenheim Museum, NY, the Museum of the Art Institute of Chicago, the Museum of Fine Arts, Boston, MOCA, Los Angeles, the Walker Art Center in Minneapolis and many others. She was the recipient of two National Endowment grants and a Guggenheim Fellowship.
.
.
.
.
.
.
.
source: artelit2015blogspot