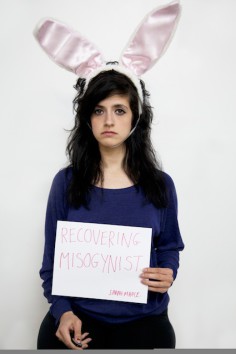 Sarah Maple likes dressing up. Depending on her mood, and her current obsession, it might be as a big baby, or it might be in a burka. Lately, for her new series of feminist artworks, she has been channelling her inner Disney Princess, donning various shiny nylon costumes – “eBay’s finest!” – and photographing herself hard at work in traditionally “male” environments. There’s Sleeping Beauty performing open-heart surgery in a pink tiara. There’s the Little Mermaid, running a boardroom meeting in tangerine wig and glistening fishtail. And there’s Belle, in a gold, ruffled ballgown, screaming at the ref from the dugout – self-portrait as fairytale football manager.

Other get-ups are less elaborate, but no less striking. One recent portrait shows the 27-year-old artist squeezed into a schoolgirl outfit from Ann Summers – ill-fitting mini-kilt, white knee-high socks, blonde pigtails – sulkily holding a sign that reads ‘I’M IN MY PRIME’. For her full-length portrait of a ‘female artist’, meanwhile, she popped on a nude bodysuit and accessorised with heels, plastic breasts and giant pubic wig.

Today, Maple has come as a young British artist – in red woolly jumper, paint-spattered jeans and Doc Martens. The eyeliner is extravagant, the dark hair a bird’s nest of Brandian proportions but otherwise this is clearly a dress-down day. “Would you like a cup of tea?” she asks politely, heaving open the door to her studio, a lock-up on an unlovely industrial estate in Crawley. Inside, the room is tidy, a little girly, perhaps. There are flowery deckchairs and pencil pots dotted about, a sofa covered in a bright pink throw and on the far wall an immense canvas showing the artist standing, fist raised, in the middle of a group of horrified bystanders. The front of her white skirt is stained with blood.

“It’s called Menstruate with Pride,” says Maple, busying herself with the kettle. The other day, a builder from one of the neighbouring lock-ups dropped by and spotted the painting. “He said, ‘What are they all looking at, then?’. I hadn’t painted the bloodstain on yet, so I told him. He said, ‘Okaaaay’.” She laughs. “I love getting the reaction. When people see my work, I want them to feel something. If it doesn’t do that then I don’t see it as serving a purpose. And people always react, whether they love it or hate it.”

Barely five years out of art school, Maple has already experienced her share of both reactions. In 2007, she won the inaugural New Sensations Prize – a high-profile search by the Saatchi Gallery and Channel 4 for the UK’s most promising art graduate. A year later, the windows on her first solo exhibition, at Salon Gallery in London, had been smashed and she was receiving death threats. The provocation was a series of paintings which showed her, a Muslim, wearing her mother’s burka and, variously, smoking a cigarette, wearing a badge saying ‘I Heart Orgasms’, baring one breast and cradling a piglet.

The work was a response to her upbringing in Eastbourne – “the whitest place in the world” – the youngest daughter of an Iranian mother and a Kentish father. “There were no Muslim people apart from us. I remember thinking, ‘I wish I knew just one Muslim person, that someone would get me and what I’m talking about'”, she says. “I just didn’t feel like I should be judged for being mixed.” Judged she was. Even her parents refused to speak to her for two days after the exhibition opened. “It was horrible. Even now I feel paranoid,” she says. “If I could take it away, I probably would [but] I don’t regret the work I made.”

For a couple of years she was “paralysed”, unable to make art. Then she found feminism. What started out as the odd performance piece – standing in the window of House of Fraser holding a sign saying ‘Women! Flash for a discount!’ or slipping her own, clumsily covered-up version of page 3 into hundreds of Sun newspapers across London – has become her artistic raison d’etre.

The result is It’s a Girl!, her first solo exhibition in the UK since the piglet controversy. While less incendiary than her 2008 debut, it is no less punchy – a riotous, ridiculous, angry, absurd take on modern womanhood, from Vogue to vajazzling, misogyny to menstruation. It’s Tracey Emin crossed with the Guerrilla Girls, with a hefty nod to Cindy Sherman’s cartoony self-portraits and the sign pictures of Gillian Wearing.

The Disney Princesses are typical of her tongue-in-cheek swipes at gender politics – slapstick, sharp and immediate. Beneath the wigs, though, lies a serious message about girls who are brought up to aspire to fairytale ideals of passive beauty.

“Saying you’re a feminist seems to be the worst thing in the world,” says Maple. “I’d love to bring it more into the mainstream. It’s nothing to be embarrassed about.” Elsewhere in the show the artist poses in pink bunny ears holding up the sign ‘Recovering Misogynist’ and photographs a vajazzle which up close spells out ‘Votes for Women’. It was inspired by the now notorious Newsnight segment devoted to the trend. “What really annoys me is the way feminists disagree with one another. We’re all on the same page! Some women were saying, ‘This is so trivial. Vajazzling is not an important issue’. Well, yes it is. All these little things feed into our culture – and make it worse.”

After misogyny, Maple’s other favourite target is the art world. In a not-so-subtle dig at a certain millionaire artist, she recently had a T-shirt made up with a picture of a shark and photographed herself wearing it, holding a sign which reads, ‘I’m An Edgy Contemporary Artist’. “I’d been talking with my artist friends about how fed up we are with this obsession with the YBAs. Come on! There’s a new generation out there! Let’s talk about someone other than Damien Hirst.”

Or Tracey Emin. Inevitably, Maple’s in-yer-face, self-centred take on the female experience has seen her hailed as the heir to the most infamous of the female YBAs. “It’s a bit lazy as comparisons go,” she pulls a face. “It’s like she’s the only woman artist people can think of.” Stella Vine, Frida Kahlo, Peter Blake and Hogarth are her favourite artists, but the influence of the YBAs is undeniable. And not just because, in Saatchi, she shares the same Svengali. She made the work which first caught the collector’s eye when she was in her final year studying Fine Art at Kingston University – a photograph of herself wearing a pair of ‘I Love England’ pants, standing in front of a poster of Kate Moss. So began half a decade of dress-up.

She also shares the Saatchi brood’s witty, conceptual approach, and talent for self-promotion. She had a faithful following on MySpace before she had a degree. Last week, a giant portrait of her proudly displaying her hairy armpit was plastered across London Underground and she is currently being trailed by two documentary-makers from LA who are making a film about her. “It will be like a reality show – The Only Way is Maple!” These days her paintings sell for £5,000 to £20,000, while her single-edition photographs go for up to £10,000.

She is now on the hunt for the next piece. “I don’t feel like I can make work without an idea,” she admits. “But I don’t think you can just have craft either because that’s boring.” The death of her grandmother last year has inspired a more reflective approach, perhaps a return to work about her faith. She points to a large self-portrait, in which she stands against a white wall, wearing jeans and a simple green T-shirt. “It’s called Self-Portrait with Cat and Grandparents. It’s the first time I’ve ever painted something while crying. I’ve never felt emotional making something before,” she says, looking thoughtfully at the canvas. “That’s the only one I really put my heart into. I am quite private, really, even though I show my face all the time. I don’t really want people to know what I’m feeling.”
.
.
.
.
.
.
.
source: esarahmaple
Sarah Maple was born in 1985. She completed a BA in Fine Art from Kingston University in 2007, and now lives in her native Sussex. In the same year she also won the ‘4 New Sensations’ competition for emerging artists, run by Charles Saatchi. Since then Sarah’s artwork, films and performances have been exhibited in New York, Canada, Israel and throughout Europe.
‘Not for the coy or faint of heart, these unflinching, occasionally even controversial, investigations into what it is to be a woman and a Muslim in 21st century Britain are made joyful by her own very personal brand of boisterous, tongue-in-cheek humour. This is not sensationalism for sensationalism’s sake, but rather a heart felt urge by a twenty-seven-year old artist of great sincerity and talent, for the viewer to look again, and this time with a more questioning eye, at traditionally accepted notions of identity, gender, culture and religion.’ – Beverley Knowles 2011
.
.
.
.
.
.
.
source: sarahmaple
Sarah Maple, It’s A Girl! – 2012
Seeing Sarah Maple’s work got me raving again like we did in the 70’s when we naively thought we could change the world.
Maple has been named ‘the heir to Tracy Emin’s throne’ by the Independent on Sunday. I have to confess I found that a sobering thought because as far as I know Tracey rejected Feminism while being happy to benefit from those who took risks and did the hard pioneering work, artists such as, Kate Walker, who sewed her life in to her work in pieces such as The Other Side of the Blanket. Tracey went for the money without reference to those who paved the way for her success.
So it’s a pleasure to see Sarah’s work, closer to artists like Valie Export, Lynda Benglis, Loraine O’Grady, Suzy Lake, Kirsten Justensen, Alexis Hunter, Monica Ross, Loraine Leeson and later Sonia Boyce and Sutapa Biswas, to name a few, mostly from my generation when feminism was hot, in a recession, incidentally, as now.
These women’s work has come back into view in recent years, in part on the back of various feminist art shows, notably WACK!: Art and the Feminist Revolution that featured the work of 119 women artists and toured MoCA Los Angeles, MoMA PS1 New York, The National Museum of Women in the Arts, Washington and Vancouver Art Gallery, throughout 2007-09; Gender Battle at Santiago de Compostella in 2007; and perhaps most interestingly of all because of it’s cross-generational theme Rebelle: Art and Feminism, 1969 to 2009, that took place at the Museum voor Moderne Kunst, Arnhem, Holland in 2009. Like the 2009 Istanbul Biennial these shows included artists unafraid to take risks, some of whom are now coming from places beyond the usual New York / London / Paris / Frankfurt axis.
So, young artists like Shadi Ghadirian (an Iranian artist) whose images of burka clad figures with kitchen utensils over the facial area and Zanelle Muholi’s (a South African artist) with images of transgender, gay and lesbian individuals, present alternatives beyond the official mode and in so doing begin a new phase in the breaking down of gender and racial stereotypes.
Similarly, Maple who was born and lives in Sussex but uses images from her own ethnic Muslim background, uses those same images of the burka clothed figure (see Blue, Badges, Burka) but also transgresses that image by using body images (see Passport) and in one of her new paintings menstruation (see Menstruate with Pride).
Maple uses a variety of media from Performance to Posters to Painting, embracing, I think, the notion of finding the right media for the right context, the right subject, at the right time; in itself a brave move – its easier to market an artist using a recognisable single media.