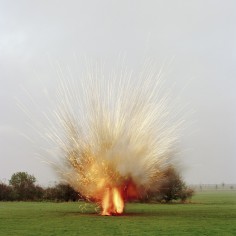 Sarah Pickering researches truth versus verisimilitude through the medium of photography. Her unmanipulated images preserve actions whose causality and construction seems to be part of an alternate, but no lesser, reality. She has worked with the emergency services, pyrotechnic manufacturers, tv prop makers and the police to produce some of her most recent bodies of work. Exhibitions include How We Are: Photographing Britain, Tate Britain 2007; New Photography in Britain, Galleria Civica di Modena, Italy, 2008; Signs of a Struggle: Photography in the Wake of Postmodernism, Victoria and Albert Museum, 2011; Theatres of the Real, Fotomuseum, Antwerp 2009; Manipulating Reality, Palazzo Strozzi, Florence, 2009/10, An Orchestrated Vision: The Theater of Contemporary Photography St. Louis Art Museum, USA 2012 and Living in the Ruins of the Twentieth Century, UTS Gallery, Sydney 2013. Solo exhibitions include Ffotogallery, Wales 2009, Incident Control at the Museum of Contemporary Photography, Chicago 2010 and Art and Antiquities at Meessen De Clercq, Brussels, 2011. Her most recent body of work, Celestial Objects was commissioned by Locus+ and exhibited Durham City as part of the North East Photography Network event in 2013. Her monograph Explosions, Fires and Public Order is published by Aperture and MoCP. Gallery Representation is with Meessen De Clercq, Brussels.
.
.
.
.
.
.
.
source: mocporg

Sarah Pickering’s photographs disturb our sense of security and illuminate the ways in which we cope with traumatic events that are beyond our control. Her pictures depict environments and events crafted specifically for simulated training to prepare police officers, firefighters, and soldiers for calamities ranging from fire and civil unrest to terrorism and war. By exposing the absurdity and controlled nature of these environments, Pickering’s images reveal our predilection to deflect fear by trying to anticipate and plan for it—and our tendency to create a story to help us process it.

Like Fire Scene, Pickering’s Incident pictures (2009) are shot at the Fire Service College, but in facilities designed less for forensic analysis than for logistical and tactical training. Sparse rooms built of concrete and metal contain simple forms such as a steel framed bed, filing cabinets, chairs, and human-shaped dummies made to withstand fire for future use. The only evidence of human presence is seen in finger and foot-prints in the ash, traces of life that activate these charred spaces. Pickering takes inspiration from the grayness of the scene by pushing the contrast of her matte silver gelatin pictures to emphasize the expressive markings and their relationship to drawing.

In addition to Fire Scene and Incident, Pickering has two other bodies of work. She began the first, called Public Order (2002-05), when she was still a graduate student at the Royal College of Art in London. These photographs depict various locations used to train specialists from the British Police Service. Charged with maintaining public order, the specialist officers respond to terrorism, as well as to mayhem such as football riots and protests. The training locations are fabricated, large-scale backdrops that simulate urban environments. The largest of these, Denton, where Pickering shot most of her pictures, is a huge network of fake streets and cinder-block facades, with all of the hallmarks of a midsize British working-class city, including a football stadium, a nightclub, and a Tube station. Less realistic than a film set, Denton is staid and cartoonlike in its reductive organizational structure and general cleanliness, contradicting the reality of terrorism or a riot and their inherent disarray. Like the sets in Fire Scene, however, these locations are embedded with clues that suggest the identity of the imaginary perpetrators. Details such as bar names, graffiti, and worn furniture suggest a hardscrabble working-class environment in which the perpetrators are not inherently deviant; rather their actions are the result of circumstance. This need to humanize the trauma, to make sense of it, might promote more empathy on the part of the police and forensic trainees, or it might distance them from victims perceived as the existing in the realm of the Other.