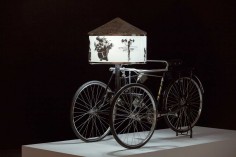 “Sustainable Cinema” is a series of kinetic sculptures that combine natural energy sources with optical illusions to produce moving pictures. Scott Hessels’ aim in creating these works is to call attention to environmentally friendly media and sustainable solutions for providing energy to new technologies.

“Lenticular Bicycle” is the first manpower-driven sculpture in this series. To accomplish this, Hessels adapted a bicycle like the ones widely used in Southeast Asia to transport cargo—and thus an allusion to the ingenuity and creativity of the family businesses there that work with bikes just like this one. The bike sets in motion a cylindrical apparatus on which images are painted. Once the cyclist starts to pedal—or the motor installed in this exhibition is switched on—the cylinder rotates and the individual images become a movie.
.
.
.
.
.
.
.
source: scmcityueduhk