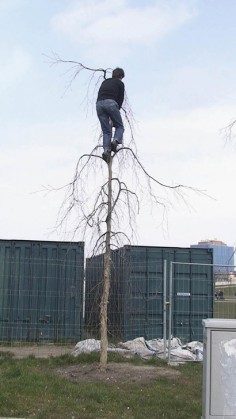 source: pgaleriethomasfischerde
*1980 in Würzburg, Germany, lives in Leipzig and Berlin
Looking at the recent works of Sebastian Stumpf one finds an interplay between performance and the recording of performance, between the execution of a physical act and the documentation of it by means of a camera. The young artist operates in two distinct realms: in the empty spaces of contemporary art institutions and in urban settings with their preexisting orders. Stumpf’s appearance before the camera strikes the viewer as both artistic and subversive. An inconspicuous architectural detail suddenly becomes the catalyst for a physical exploit that astonishes, appalls, inspires laughter or troubles us. The art gallery becomes a space for action. Or by an act of functional mobilization the city and its walls, columns, trees, garages, bridges and passage ways become a kind of practice field.
.
.
.
.
.
.
.
source: galeriekleindienstde
In photographs and video installations, Sebastian Stumpf tests the boundaries of his environment and oversteps them seemingly effortlessly. His selfdramatizations call into question the relationship between body and space. Short video sequences document physical actions that Stumpf executes. These performances do not take place live in the exhibition space but are projected as already-completed works at the exact site where they were originally staged: video work and projection space thus overlap and merge.