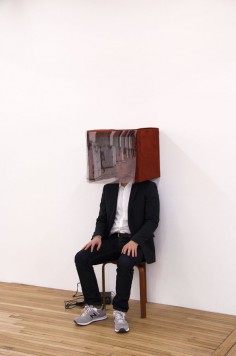 As might be expected of a composer-artist, Sergei Tcherepnin’s captivating solo show at Murray Guy is as much about hearing as seeing. In recent performances, the Brooklyn-based Mr. Tcherepnin has infused electronic impulses through the bodies of audience members, effectively transforming their anatomy into musical instruments. He does something similar with various objects in the show, turning the gallery into an orchestral suite of sounds and vibrations.

To experience one of the two pieces that make up “Ear Tone Box,” you sit in a chair with your head enclosed in a metal box that’s affixed to the wall and listen to high piping and chirping sounds that could be coming from the box, from your head, from your cellphone or from the gallery beyond. A set of three large sheets of rusted metal generate different, amplified sounds as you walk around them. If you sit on a nearby bench — one of those big, indestructible wooden New York City subway benches transported to the gallery — a rumbling buzz goes right up through you.

It all felt like music to me, with the score accompanied by a short video of what could have been a dance performance. Titled “Pied Piper Playing Under the Aqueduct,” it shows the artist, tall and lean, dressed in a floral mini and fishnet stockings walking among the monumental columns of an aqueduct in Rio de Janeiro. He looks a bit distracted, as if looking for something, or thinking, or waiting for someone to show up — us, maybe, his baffled but buzzed and enchanted band of followers.
.
.
.
.
.
.
.
source: momaorg

“I am interested in transforming various mundane objects into speakers. Listening to sound through a cardboard box is very different from listening through a chair, which is very different from listening through computer speakers. In these works, I am attempting to expand aural dimensions by orchestrating flexible listening situations, which draw attention to the materiality and variation of sound as filtered through these objects.”

Trained as a composer, Sergei Tcherepnin (b. 1981 Boston, MA) works at the intersections of sound, sculpture, and theatre. His work is currently on view in the Georgian Pavilion at the 55th Venice Biennale, and he will be included in the forthcoming exhibition Soundings, opening on August 1 at The Museum of Modern Art, New York. Recent exhibitions include Ear Tone Box, Murray Guy, New York (2013); The Imminence of Poetics, 30th Bienal de São Paulo (2012); Looking at Listening, with Ei Arakawa, Taka Ishii Gallery, Tokyo (2011); Be a speaker. So be it…, with Ei Arakawa and Gela Patashuri, CAC Brétigny (2011) and the Showroom, London (2011). Recent performances include The Solomon R. Guggenheim Museum, New York (2012); Art Institute of Chicago with Das Institut and United Brothers (2012); Issue Project Room, Brooklyn with Woody Sullender (2012); the 30th Bienal de São Paulo, with Jutta Koether and Yuki Kimura (2012); and Gavin Brown’s Enterprise, New York with Das Institut and United Brothers (2012).
.
.
.
.
.
.
.
source: listartmitedu

Sergei Tcherepnin was born in Boston in 1981, and currently lives and works in New York. He received a BFA from Bard College and subsequently received his MFA from the Milton Avery Graduate School of the Arts, Bard College, Annandale-on-Hudson, New York in 2011. His recent performances and installations include: Roulette, New York; The Museum of Modern Art, New York; Pavilion of Georgia at the 55th Venice Biennale; Murray Guy, NY; The Kitchen, NY; Yvon Lambert, Paris; Karma International, Zurich; Guggenheim Museum, NY; and the 30th São Paulo Biennial, Brazil. He is participating in the 2014 Whitney Biennial and is a recipient of 2014 Villa Romana Fellowship in Florence, Italy. The List’s presentation of Tcherepnin’s work will be the artist’s first solo museum exhibition.