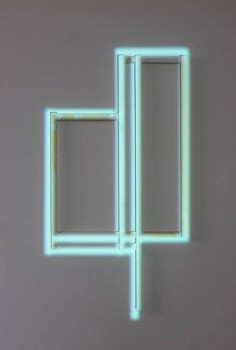 “Art is a tool for contemplating mechanisms that shape the world.”
Shahin Afrassiabi’s “displays” are 3D spatial compositions using everyday objects which undermine each other – particularly interior building materials and domestic objects (wallpaper, plywood, curtains, carpets, TVs). He is fond of shop window displays and his work is influenced by architecture and early 20th century design, including Russian Constructivism.

After graduating, Shahin set up The Trade Apartment with architect Raymond Brinkman and held his first solo show, ‘You’re a Heavenly Thing’, earlier this year. As well as several exhibitions in the UK and abroad, he has taken part in ‘These Epic Islands’ 2000 (curated by Brian Griffiths) and ‘Surfacing’ 1998 at the ICA.
.
.
.
.
.
.
.
source: whoislog

Shahin Afrassiabi, born 1963 in Tehran, is an artist. In the late 1980s, Shahin was a member of the ARC group along with [Gid London], Nicola Pellegrini, Ottonella Mocellin, Lennie Lee, David Miles, and Emma Southgate. He studied for an MA in Fine Art at Goldsmiths College. He was one of ten artists selected for the Beck’s futures competition. He has exhibited at a number of well known public galleries including the ICA 2000, Whitechapel Gallery 2001, the Project Art Centre Dublin 2004 as well as private gallery Vilma Gold. His work has been described in The Guardian.