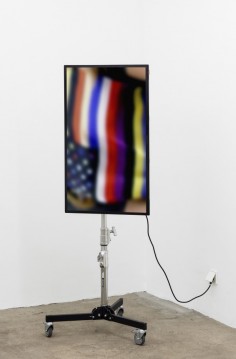 Born in 1975 in Geneva, Switzerland, Shahryar Nashat lives and works in Berlin. Nashat uses a broad range of media including video, digital print and photography. His work is characterized by an emphasis on staging and rehearsal. His pieces often present a series of partial visibilities constructed through dramatic montages, interruptions and abridgements. These incomplete representations suggest fundamental desires and anxieties, at times framing the body as the locus of an unconscious conflict, or building psychological tension around the production of an object. Nashat also utilizes text and sound to complicate images’ straightforward appearances. His work “Plaque (Slab)” (2007) combines found footage of Glenn Gould performing amidst monolithic sculptures with a video recording that documents the fabrication of a concrete slab in a factory in Berlin.