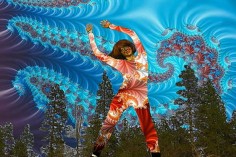 The hysterics of personal improvement and self-healing find their manifestation in hypercoloured video animations that blend together the aesthetics of children’s programmes and home shopping infomercials. In her work Moulton creates worlds at the threshold of absurdity and truth, catharsis and cliché, the material and the spiritual. She positions herself in the role of an individual moving with worry and wonderment through environments designed from autobiographical experiences, subconscious associations and fantasy. Ascribing healing properties to the banal trappings of everyday life, Moulton’s works elicit a potent empathy on the part of the viewer that allows for these narratives to continue beyond the immediate experience of an artwork.

Shana Moulton grew up near Yosemite, California, earned her BA from University of California, Berkeley in Art and Anthropology and her MFA from Carnegie Mellon University. Over the past ten years she has been developing her ongoing video/performance series Whispering Pines, in which she plays the role of “Cynthia”, both a fictional figure and the artist’s alter ego. Moulton has had solo exhibitions or performances at The New Museum, SFMOMA, MoMA P.S.1, Performa 2009, The Kitchen, Electronic Arts Intermix, Art in General, The Andy Warhol Museum, The Palais De Tokyo in Paris, The Migros Museum in Zurich and the Times Museum in Guangzhou. Moulton’s work has been reviewed in the Village Voice, Artforum, the Brooklyn Rail, the New York Times, Artnet Magazine, Frieze Magazine, Art Review, Artpress and Flash Art. She is a featured artist at Electronic Arts Intermix and Art21 and teaches art at The Kunstakademie Münster.